I've actually made quite a bit of progress on the second quilt for the Quilt Gather. I already have a name for it too: "Love Makes a House a Home." As it turns out, there are several house blocks in this quilt. Let me show you what I've been doing.

I'm thinking of this as a row-by-row quilt. That first row I showed you (in this post) was made entirely of orphan blocks. It will run across the middle of the quilt. I began the next row by cutting up some of the fabric leftover from the back of the first quilt for the Quilt Gather into six inch squares. 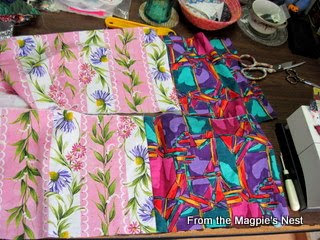 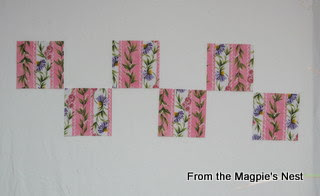 My plan was to alternate them with the six inch blocks I was making a few months ago out of scraps. There aren't that many left at this point!

To get the necessary width I tacked on a couple of liberated stars. The one on the left was a reject from Sunflower's Big Girl quilt. I made the one at the right end to balance out the row.

The next day I started to put together another row similar to this one. It ended up reading very "light" compared to this row. By the end of the day I had taken this row apart and replaced the pink alternate squares with a lighter version, also cut from the trimmings of a quilt back.

Oh, here you get a sneak peek at the fabric that made the cut for sashing. That was a whole day's effort in itself! At this point you probably won't be able to get a better look by clicking on the photos. I've had to add pictures and delete pictures since I did my first upload. Rest assured that I will be showing you the whole enchilada in the next post or two.