I'm still nibbling away at fabric I bought back in the beginning of my quilt making career. Some of it is nearly 20 years old. I still think they're fun prints though! The problem tends to be that back then I rarely bought more than quarter yard cuts, which makes it hard to do anything of any size. A lot of times I bought prints from which I could fussy cut images. I still like to do that but in an effort to update my stash I'm currently trying to use up the older stuff as quickly as possible. The Scrappy Trips process has become a go-to method for me of late.

Most recently I combined old and new prints to make a school themed quilt top: 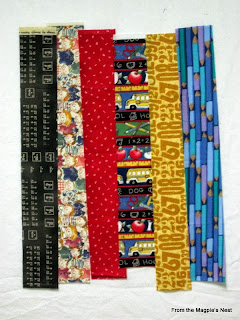 Actually, as I'm looking at that photograph I realize that only two of the six prints are old. Both of them had to be replaced part way through the project though, and I was able to substitute other old prints.

When I had four blocks made I put them on the wall this way: 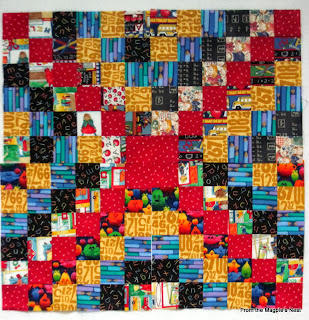 Then I tried them out this way: 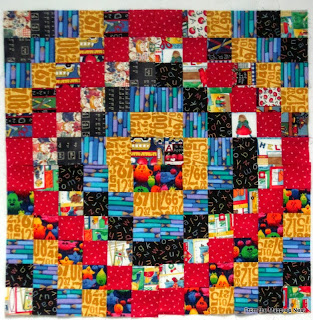 My goal was 12 blocks, to be set three by four. By the eleventh block I'd run out of the Kaffe Fasset print of pencils. Of course! I tried to find a small piece amongst my friends but was out of luck. Eventually I found something in my stash that I thought would work. The blue is nearly the same as some of that in the pencil print and the value is the same. There has to be a party every once in a while during the school year! 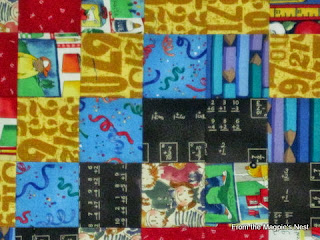 When I finally had twelve blocks I did this: 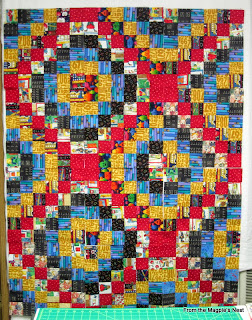 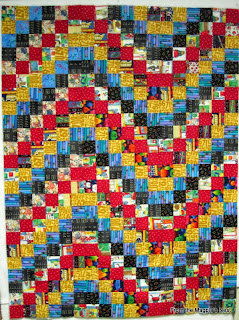 That wave layout is the one I chose to sew together. Oh, I should mention that I began with strips three inches wide so the blocks finish at 15" and the top will be 45 x 60 inches.

This panel became the foundation for the back of the quilt: 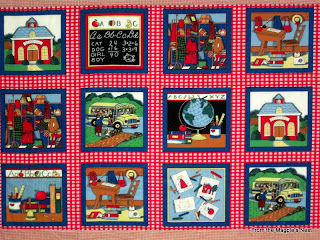 I had to add fabric to the top and bottom to make the necessary length. They are wide strips of red and blue and ivory plaids, also from back in the day. :- )

All the layers have been pin basted together, just waiting to be quilted. I would be doing that now except that I've had some issues with Ruby Blue, my sewing machine with the wider throat. Once I get her sorted out I plan to quilt this one myself with simple straight line quilting. Then it will go to a child in the Foster Care system. In the meantime, I have a pile of scraps that need to be dealt with...

That I showed you the final arrangement of the hexagon charm blocks I was working with back in August. This is where it was back then... 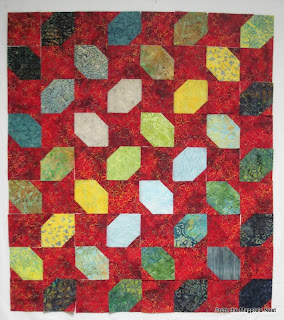 This is how it looks now: 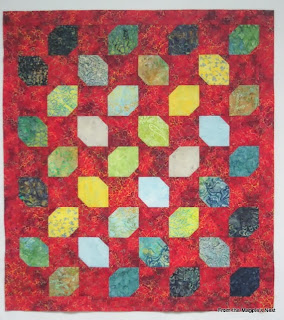 I've passed it on to my son to see what quilting design he'll come up with using his long arm skills. In the meantime, I've made a second version of the quilt.

My goal this time was to use up some of the leftovers from the wedding quilt I made earlier this year. (You can see bits of that quilt here.) So I cut 5" squares from those prints and then went down to my LQS to see what there was to use for the alternate squares. Of course there wasn't anything in my stash that I liked with the greens or had enough of for this project!

Once again I began with this layout: 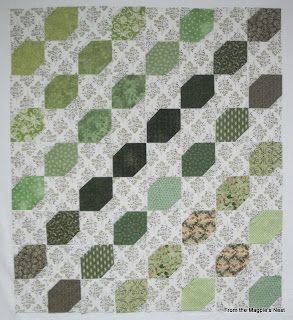 Now that I see it in the photo I like it better than I did when it was on the design wall. Still, it was pretty staid so I moved the values around a bit. I left the hexagons all pointing in the same direction this time though. 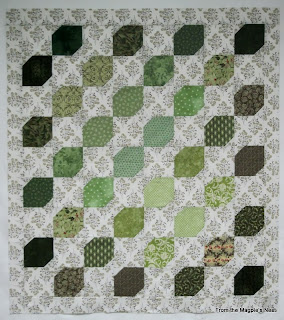 A simple two inch border all the way around finishes it off at 40" x 45". I may quilt this one myself. If I do, it will most likely be with simple straight lines going diagonally through the charm squares and the alternate squares - to create a hanging diamond effect. I find it interesting that I'm not, never have been, much of a doodler and now that I'm a quilt maker I also find it challenging to come up with quilting designs. Seems like the same skill set is involved and I still need to develop in that area!