My surgery went smoothly, nothing ugly was discovered, and as far as that procedure is concerned all is well. There have been other events that have conspired to keep me from the computer and blogging. Nothing truly serious, just annoying and debilitating.

Meanwhile, the weather has turned up here in our corner of the world. The first sign was to be seen in our shrubs: 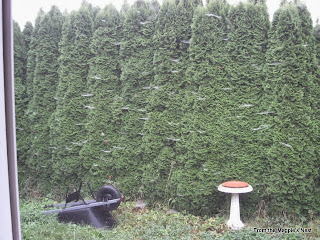 Not the greatest picture, I know, but those are spider webs decorating the hedges. Here's a closer look: 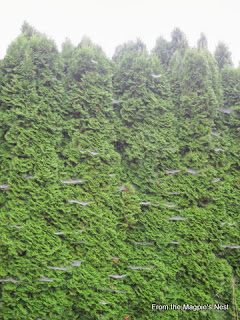 Puts me in mind of fairy clouds or something. :- )

My local quilt guild does a monthly block lottery. I don't always participate (in fact, in the past couple of years I have rarely participated) but this time around I couldn't help myself. The assignment was to make a 10 or 12 inch Halloween block. Yippeee!

For a couple of days I debated whether to just plug some Halloween prints into a pieced block pattern. Then the idea struck me to make a haunted house. hehehe. This is what I came up with: 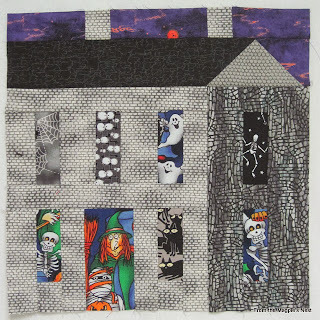 This particular house block has been in my notebook ever since the early days of my quilt making. Some of the very first blocks I made were houses. I can't tell whether this was one I designed myself or something I drafted from a picture somewhere. At the time I didn't have the skills to make it without using templates so I don't think it ever got made. After this first effort I decided to try again... 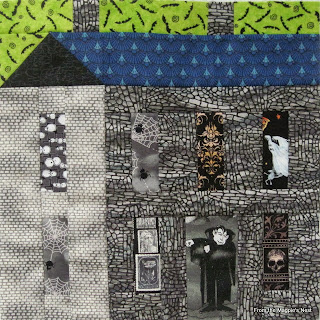 I have the most fun finding things to put in the windows and doorways! The first house was turned in at the last guild meeting but the drawing won't be until the next meeting. I'm keeping the second house.

This morning I decided to make another block for the drawing. There's a block called Buzzard's Roost in my block bible (Maggie Malone's 1001 Patchwork Designs) that I've always wanted to try. Halloween seemed an appropriate theme for such a block. Here is what I created: 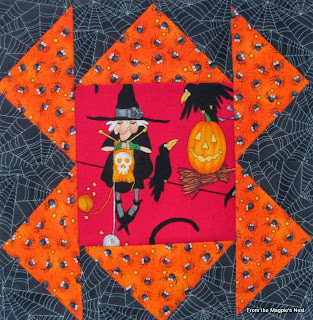 I'm very happy with it. The witch is from an Alexander Henry print. She's on a true red background though it looks a little off in the photo.

And just for grins I made this little star (6") out of scraps I had laying around. 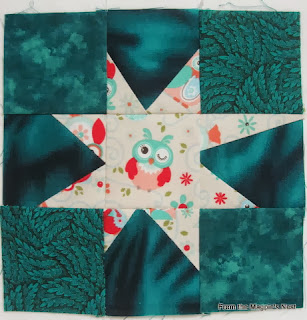 Hopefully it won't be such a long time between posts from now on. And I have a lot of catching up to do among my Blog Land friends...