There hasn't been much going on in this Magpie's Nest lately. Just one of those cyclical slumps. I've been reading instead of sewing. I'm fascinated by the way my left hand feels great one day and I can hardly bear to use it the next. All part of the healing process I'm sure.

Before the slump hit I made a couple more pages for my Sketchbook Project. This one was very simple, out of scraps from my Dr. Seuss and Reading Material quilts. 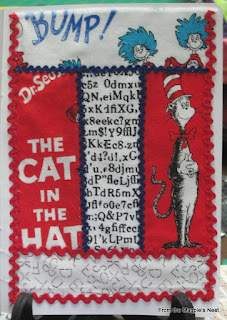 It may very well end up being the center signature of my book. I've debated whether to hide the lines of stitching on the backs of the pages but have decided to just leave them exposed. Here you can see the back of the house page you saw in the last post. 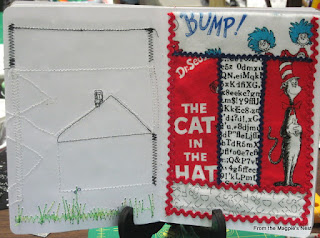 I began my sketchbook by playing exclusively with black and white prints. There's no way I could keep the color out though! 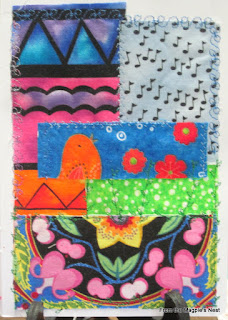 To make this composition more interesting and/or cohesive I played around with some of the decorative stitches on my sewing machines. 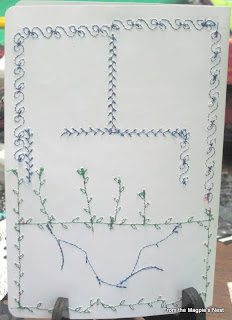 It was after this burst of creativity on my Sketchbook Project that I hit the wall. I kept reaching for something new or different to do on the few pages that are still blank. Nothing satisfied so that's when I turned to fiction. I think I'm just about read out for now so hopefully it won't be another ten days or two weeks before my next post!

More Fiber for The Sketchebook Project

Faithful readers may remember that I signed up for the 2013 Sketchbook Project almost as soon as the new project was announced. I've shown you my first few pages; you can see them here. I've been able to fill up some additional pages this week.

This first page is made entirely from scraps from my Crowns quilt. Just raw edge applique straight stitched right onto the paper. 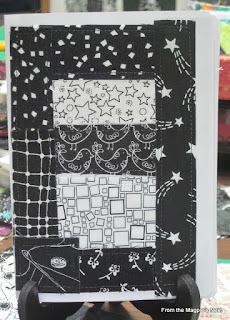 Still playing with the black and white scraps... 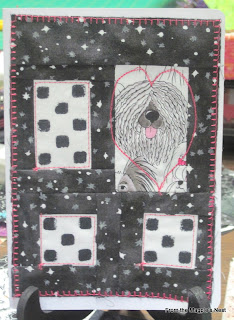 I used red thread on previous black and white compositions; this time I picked up the pink from the dog print.

But eventually I had to have more color... 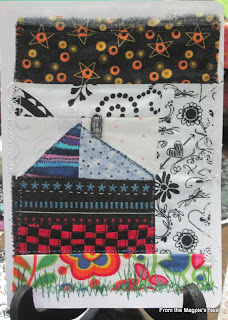 I started out simply outlining the house shape with straight stitching. Then I "drew in" the chimney with some careful machine stitching and colored it in with pastel chalk. The cotton fibers of the fabric should grab that chalk and keep it in place pretty well. You can see that I also added grass with straight line machine stitching at the bottom. Double-clicking on the photos ought to make them big enough for you to get a better look at the details.

The last page I'm going to show you in this post was created with labels from men's neckties. 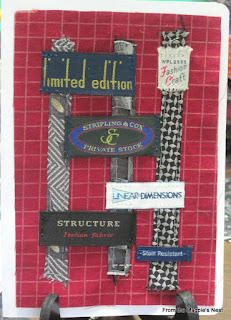 The vertical strips used to be the loops you find on the back of some ties, I guess to slip the tie ends through to keep them corralled. I really like this page. :- )

The pages in this sketchbook allow me to create postcard size compositions. It's a fun way to stretch my thinking to see how many different ways I can create an image or composition. The hard part is not being able to use beads and buttons! (The completed book cannot be more than one inch thick.) There's still time to sign up for the 2013 Sketchbook Project; I encourage you to consider it as a way to open up your own creativity!

When Life Gives You Scraps...

Some time ago one of my back molars broke. It was a tooth that had long ago been filled with artificial material. Because I am a wimp of the first order I lived with the jagged edges until a second chunk of filling fell out. 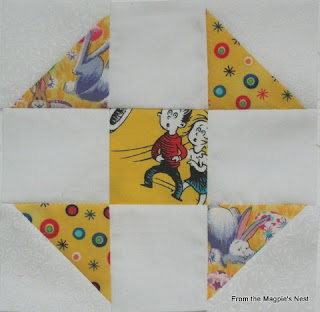 I couldn't ignore the tooth anymore. I've been to the dentist three times since my last post. Once for an assessment of what needed to be done - I came away from that visit ill from the fumes in the place. The next two visits were under the influence of a sedative. I barely remember what took place either time, although the tenderness of the inside of my mouth testifies that a lot was indeed done. I believe I have one more visit to make, to put a permanent crown in place. There will be a couple of days of ickiness while the adhesive off-gasses in my mouth. And after that no doubt my lovely young lady-dentist will have more she'll want to attend to in my mouth. {sigh}

These are some scrap blocks I've been able to get sewn up during my absence from Blogland. 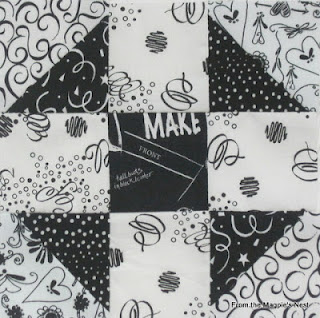 Below is a batch of Broken Dishes blocks were made up from triangles cut off when I make flying geese units. I think they will finish at 4.5 inches. 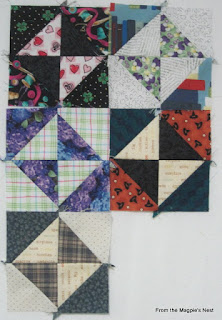 I decided to try out Friendship Stars in lieu of Shoo Fly blocks with these scraps. 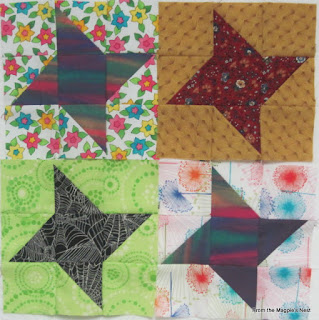 I find I don't like them as well as Shoo Fly blocks (they require me to think about how I'm placing those half-square-triangle patches!) but it will be nice to have some variety to play with when I eventually put them to use in a quilt.

A surprise showed up in my mailbox this week too. Look at this adorable Basset Hound print my sister found in a flea market near her! 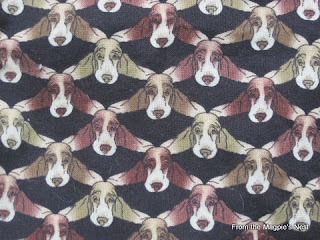 If I can manage to stay home and keep from injuring myself further I may get to start on the quilt I've been wanting to make for weeks now... ;- )
Posted by Magpie Sue at 12:56 PM 3 comments:

My hand is gradually getting better. We'd be further along if I hadn't hurt the affected fingers by trying to open our sliding glass door with that hand. You never realize how much you use your off hand until it's injured somehow!

The last thing I showed you were these four columns of scrappy Shoo Fly blocks on my design wall. My plan was to turn them into two columns for a strippy format lap quilt to donate to the Alzheimer's Disease Cooperative Study. 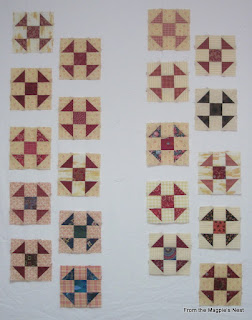 My original plan was to tie together two columns of blocks into one wide vertical strip and then separate them with a whole cloth print. I actually had a plaid pulled out for that purpose. However, the more I looked at it the less I liked the idea. I thought about leaving more room between the columns of Shoo Fly blocks. I thought about spacing them evenly and just putting alternate (whole cloth) blocks between them. That would certainly make quilting straightforward. It would be boring though. Well... let's say "less interesting".

In the end I decided to make some six inch liberated stars for a fifth column of blocks. Had to scrounge around for background prints in the same colors I'd used for the Shoo Fly blocks but I managed. ;- ) 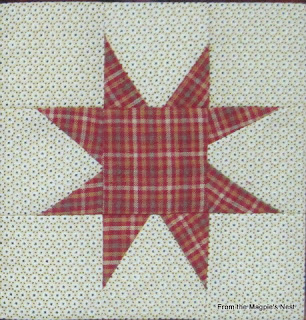 Then the question became whether to use the plaid I'd originally chosen to sash and border the blocks or to find something else. (I'd show you the plaid but I lost some photos between the design wall and the computer somehow and I'm too lazy to go re-shoot them.) It took a couple of days of auditioning stuff from my stash and sighing over the fact that I didn't want to have to go shopping for fabric (shocking, I know) but eventually I settled on the batik you see between the blocks here: 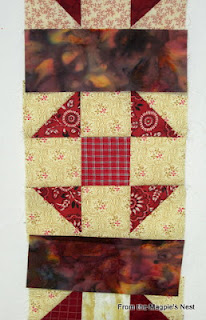 In all my years of quilt making this may have been the first time I've mixed batiks with regular cotton prints in a quilt top. It was the perfect solution though. I also decided to mix the star blocks in with the Shoo Fly blocks instead of keeping them separate in their own columns. 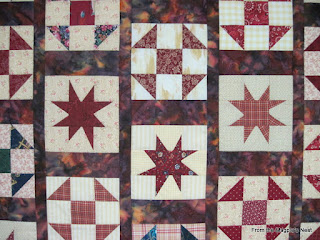 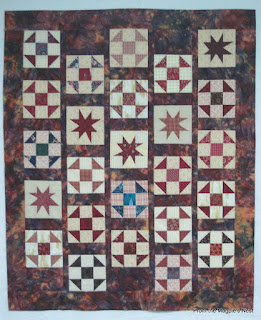 I'm really pleased with how this turned out. It's so warm, even just flat on the wall! As much as I'd like to get it quilted and donated as soon as possible I think I'm going to let it sit for a bit. I'm anxious to get started on the quilt I meant to start before I made the mistake of stabbing myself. ;- )