I finally have some pictures of the quilt I've been building for a nephew and his bride. Here you can see the bulk of the body of the quilt: 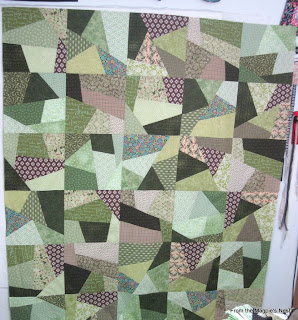 As usual, there's one row that isn't in the photo, but you get the idea. You remember there was one crazy block that was too small to use on the front? I needed to add a strip to the yardage I had for the back to get the necessary length so I started with that crazy block. 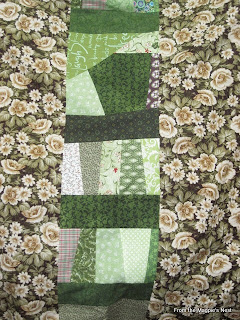 I also used some leftover bits from the strip piecing I made for the border on the front. 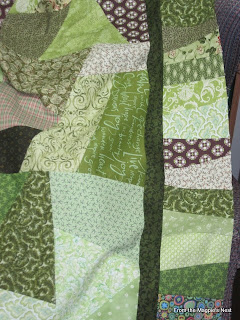 If I'm not mistaken, front and back are ready to go to the quilter! 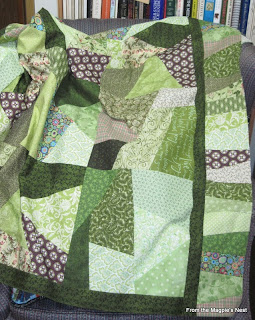 I have a feeling that quilting is going to turn this quilt into something special. It was never meant to be an heirloom but I would still like it to be a welcome addition to their new home. :- )

I've been struggling with fatigue of late. Turns out I've developed an iron deficiency. The doctor apparently saw some other things that concern her. I've had a biopsy done and am now waiting for the results. I expect to have them early next week. Fingers crossed for good news!

Hello my patient friends. I'm finally back - at least for the time being. ;- ) I'm happy to report that I haven't been sick all the time since my last post. There were a couple of times I wanted to report on my activities but couldn't get my computer to behave. Here's a little bit of what's been happening in The Magpie's Nest...

More blocks for the wedding quilt, beginning with this stack of six prints. 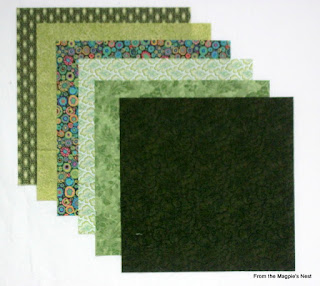 Here are the resultant blocks: 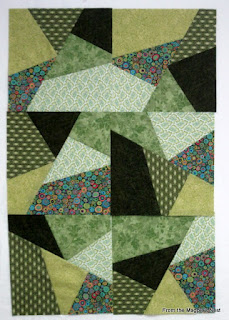 And a couple more stacks of six prints each... 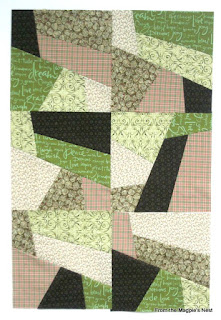 At that point I did some math. I was planning on 30 blocks, set 5 x 6, for the body of the quilt. That would have been five stacks of six prints each. Unfortunately, as you may remember, my very first stack of six prints only yielded five usable blocks. I needed seven more blocks to reach my goal of 30. Why not try a stack of seven prints? 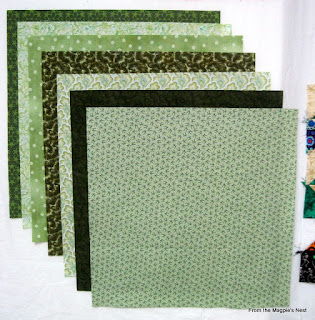 I added another half inch to the size of the starter squares, just to be on the safe side. As it turned out these are some of my favorite blocks! 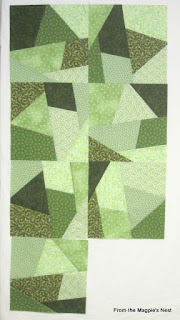 I have since mixed the blocks up and set them together into a flimsy. Don't have a picture to share though, sorry. I'm trying to figure out what to do about a border. I want to add a bit of length but not much in the way of width. Right now the top should measure 60" x 72".  I only want a couch quilt, not a bed cover, but the groom is on the tall side. So we'll see what happens.

In other news, I've had a wonderful birthday. There was sunshine and blue skies all day long but it didn't get uncomfortably warm in the house. I woke up feeling well in body and mind and stayed healthy throughout the day. That was a gift in and of itself! I started a new project with parts from an old one, and one of my gifts was four new pair of the wild knee socks I enjoy so much. It couldn't have been a better day under the circumstances, nor a better way to begin another year. :- D

The red and white stars have been put on hold for the time being. I got a little stuck when it came to making filler blocks. Bonnie just used whole cloth squares inbetween her Ohio Star blocks but I can't bring myself to do that. So I'm trying to make low volume hourglass units to spread out my star blocks. We'll get back to that eventually.

In the meantime I have a wedding quilt to create. I've been collecting various green prints - the only color cue I've been able to get from the bridal couple! - and worked to find a process that I would enjoy while at the same time producing a quilt the newlyweds would like. 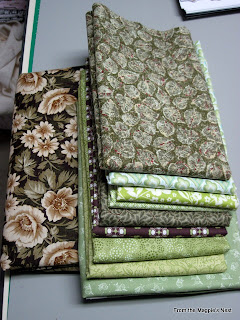 The floral print you see above will be the back and maybe an outer border on the front. Maybe. You're only seeing a portion of the greens I've collected. Don't tell my husband, but I think I spent more than we budgeted for fabric for this project. ;- )

I've decided to use the stack and slice and shuffle process again. I enjoy the variety each stack of prints offers and it allows me to make five or six blocks at a time. 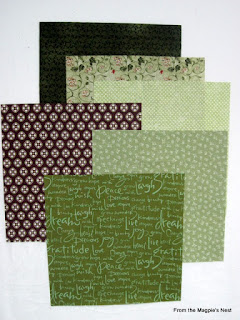 I began with 14" squares of fabric and made five cuts for six patches in each block. 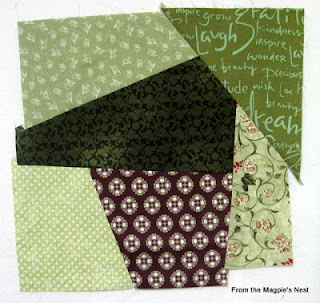 The theory was to make twelve inch finished crazy patch blocks. That meant trimming the blocks to 12.5" once they were reassembled. The first time around I had two that came out big enough to trim down to 12.5". The other four were far too small and wonky. That really threw me for a loop. I've used this process often enough that I felt very confident I would get good results. Apparently I was a little too confident!

This morning I figured out what I'd done wrong. I'd turned a pair of patches upside down when sewing them back into the block. So I've taken those blocks partially apart, turned those patches right side up, and made other adjustments where necessary (and possible). 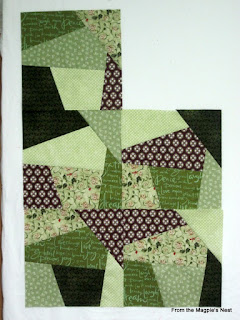 I now have the first five blocks done. I'm not sure what I'll do with that too-small block at this point. The next step is to try another stack, see if I can get 12.5" out of them, and then make further decisions. I may be able to add scraps to the small block and include it in the quilt top or I may not need it. I'm not 100% certain how big this quilt is going to be yet.

Between the seaming of the crazy patches I sewed up these two 9" liberated stars: 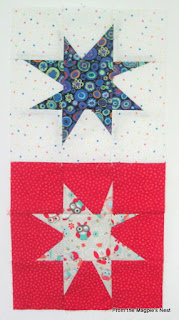 The owl print in the lower block is stinkin' cute. It's a new arrival at my LQS. I may have to go back for more... maybe make myself a new set of potholders to replace the burned and stained pair currently on display. :- )
Posted by Magpie Sue at 12:43 PM 1 comment:


Last year I didn't finish the challenge project I was working on for the La Conner Quilt and Textile Museum in time to submit it for their annual quilt festival. In fact, it's still in pieces. But I wanted to try to participate again this year and asked my friend to pick up the challenge packet for me. You can see the two challenge prints here.

I struggled with what kind of entry to attempt this year. Since the sewing caddy proved to be too challenging last year I decided to simply make a little wall quilt. I also made the executive decision to ignore the obvious theme of the challenge fabrics. Once I threw that out the window the green shades in the prints became the challenge. I decided to focus on the shade I liked the best... and that led me to my Halloween prints! 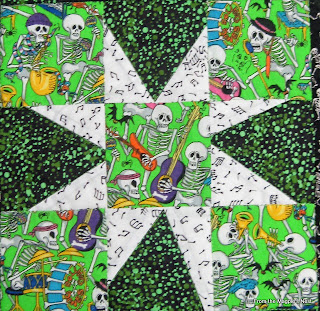 The nine inch liberated star took care of one of the challenge prints. I fussy cut my favorite part of the second print, the concentric circles, and used them in 4.5 inch star blocks. The question was, how to use them?

You can see that in the end I put them in the corners of this 15" wide, 18" high composition. 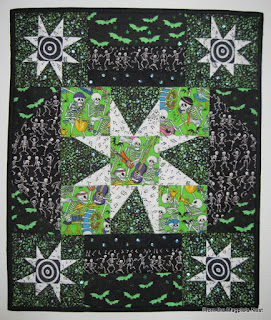 After stitching in the ditch around the main elements I felt the quilt needed something more, and the dotted background print needed to be tempered somehow. Whether I accomplished that or not is up to the viewer. My instinctive approach was to use beads and sequins to disguise the busy print and fill in the less busy prints. 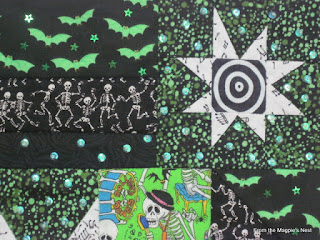 You should be able to double click on the pictures to see more details. I took my cues from the skeleton band and did my best to create an outdoor concert scene. 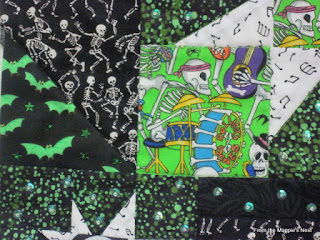 If you look closely you may be able to see that the name of the band is The Rolling Bones. All I need now is a title for this piece. I have some ideas, based on the idea of an annual concert, but so far I haven't been able to pin it down. Suggestions are welcome!

On a similar note, I recently made this 8 inch friendship block for a guild member. She asked for Sunbonnet Sue blocks, with Sue doing something the maker enjoys. I do not enjoy applique (even though I can bead the dickens out of a textile!) so I immediately began to think about how to piece Sunbonnet Sue. Eight inches is pretty small for someone who also does not paper piece so I had to keep it simple. I don't remember now what inspired this version of Sue but let me present my Wiccan-bonnet Sue: 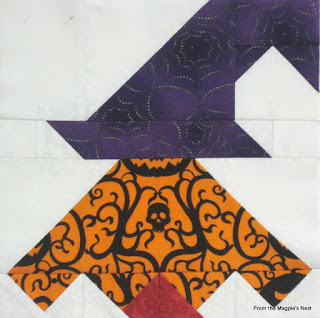 She's not exactly doing anything but she does represent my love of piecing and skulls and Halloween. ;- )

I believe I mentioned that I was preparing quilts for a local show. The quilts are home again. Unfortunately, they picked up enough fragrance from hanging in a public space for three days that I can't be close to them yet. On the happy side, we've had a couple of truly sweet early summer mornings so I've been able to have the windows open to speed the airing out process. I'm having second thoughts about entering any of them in the county fair now though. The other side of that coin is that the building in which the quilts are displayed at the fair is pretty open and therefore well ventilated. Maybe they won't pick up as much scent in that venue. I'll leave the sleeves in place for the time being; the fair is only a couple of months away.

It's been a rugged several weeks in terms of my health and well being. There's no real promise that things are going to be better from this point forward but I'd sure like to be able to post more often again. And see what everyone else has been up to while I've been out of commission. Fingers crossed! (Lord knows that will work as well as anything else I've tried!)