The Creativity challenge for the month of July is "Dream." That meant endless possibilities! It's been in the back of my mind all month. For a while I thought I would simply finish a preemie quilt I've had hanging in the closet for way too long. You know, sweet dreams for a newborn and all that. But then I got to thinking about what to do for the Bead Journal Project for July. (I have April's ornament done but have not shown it yet. May's is under construction. I have an idea for June but am not sure how I want to execute it.) I've also been thinking about doing something with a steampunk flavor to it. Then the other day it suddenly occurred to me that I could try to pull it all together into one project.

I used my 15 minutes of piecing to produce the bottom half of my ornament: 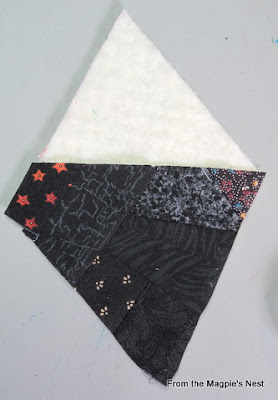 This is what my work surface looked like at the end of the process: 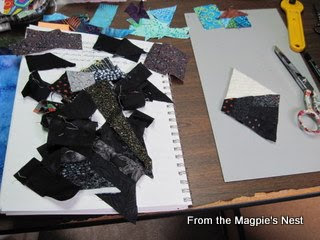 I found a shimmery white polyester in my stash to use for the upper half of the ornament. Right after the challenge was announced I had purchased a pair of wing charms, specifically because they are printed with the word 'dream.' Then I had to find something to attach them to... ah! I've had this figure in my charm stash for a long time. This will be a great place to use it!

I also bought a packet of watch parts when I bought the wings. (I told you I wanted to do something steampunk!) Dumped them out, filed off sharp points, found sequins and other things to use with them and was well on my way. 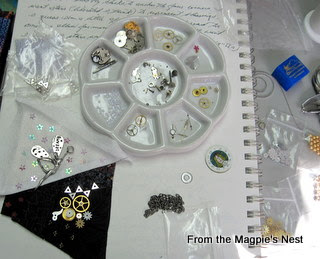 That hard line between the top and bottom halves of the diamond bothered me. I went to the store to look for a ribbon I could couch down and brought home two possibilities (and a huge headache). By themselves neither one really gave me the look I wanted. But I wondered whether a cotton ball might not give me the cloud-like impression I was after. I pulled one apart and used the tiniest shreds of it under the sheer white ribbon. Iridescent seed beads tack the ribbon down in a zigzag over the cotton. Success! 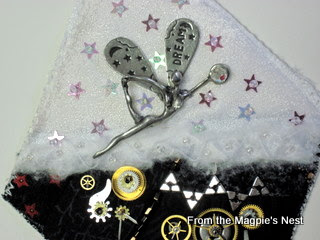 So here's the final product: 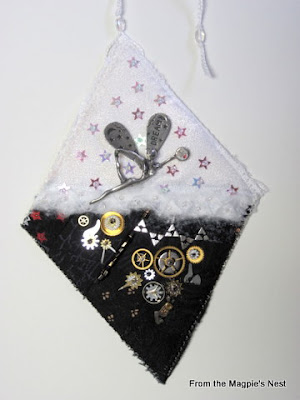 I'm very happy with it. (Since the picture was taken I've trimmed off some of those ravelling threads.) To me the clockwork bits at the bottom represent the analytical aspect of my mind and the fairy is there to remind me to take time to dream, whether it be in daylight or while I'm sleeping. And I've fulfilled two challenges in one project! :- )