SAL in September Too

This stitch along group checks in on each other's progress every three weeks. That means every once in a while we get two check-ins in one month, like this month. And I actually have two more blocks to show in the block of the month series I've been using for this SAL! I completed 'joy' right after our last check in. 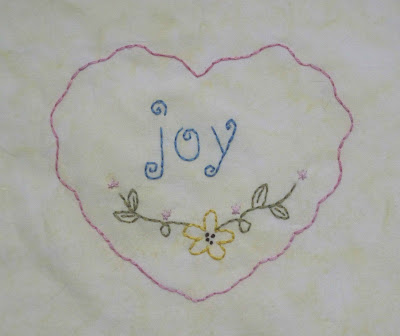 And got a good start on 'goodness!' 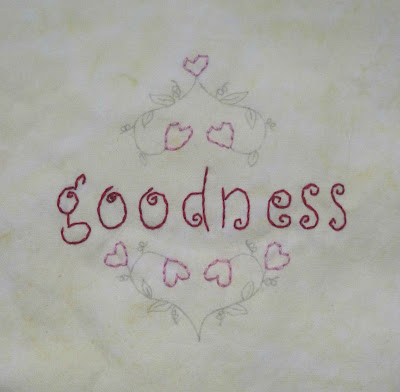 'Faith' is waiting in the wings. Without going to look, I think there are nine blocks in total in this series. My plan is to build them into a quilt eventually. It could be tricky to find just the right print to tie them all together but that's a challenge for another day.

There are all kinds of needlework being done by the members of this group, all of it interesting and/or inspiring. Get a cup of your favorite beverage and settle in! Members span the globe. If you'd like to have accountability for a piece of needlework lurking in your closet let Avis know. 😊

Bee, Myself and I in September

I've put the binding on the quilt I've been working on under Carla's challenge for Bee, Myself and I. I've been calling it Botanical Blur because one side is a version of the Rainbow Blur pattern found on the Free Spirit Fabrics web site. 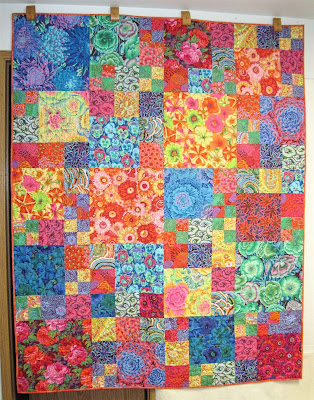 James quilted it with an allover meander because these prints are so busy. He used a variegated thread that blends perfectly with the colors in the blocks.

The other side, the official back of the quilt, was made from a jelly roll of batiks called Pink Lemonade. 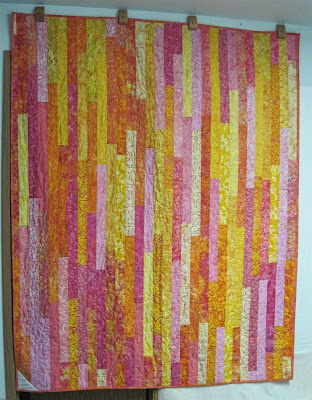 I added a few batiks of my own when I made this some years ago. It didn't look like much as a flimsy but with the quilting it suddenly sparkles. Now I don't know which side is my favorite! I've decided to christen this quilt Pink Lemonade in the Garden. I've been enjoying both sides on my bed since I completed the binding.

In just the last few days there's been another project that qualifies for Bee, Myself and I. It began with a couple of Halloween prints that I turned into a pair of pillowcases for our bed. 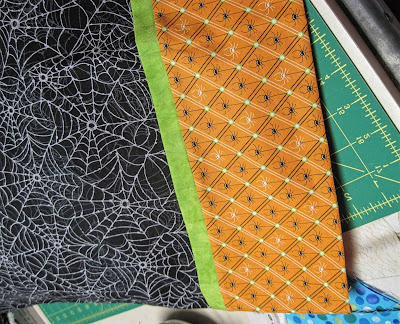 That inspired me to look for other yardages of Halloween prints in my stash to see whether I could also make pillowcases for the granddaughters. Most of the time I don't buy more than a half yard of any one thing. Of course, when there are going-out-of-business sales or other great deals to be had, larger cuts tend to come home to roost. Lo and behold, two yards of a cute ghost print and two other single yard pieces became these: 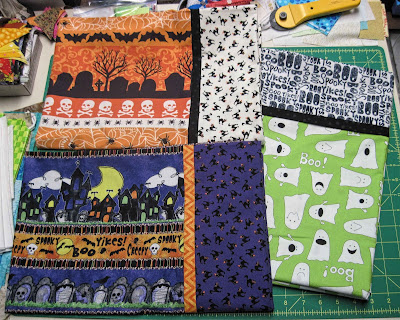 Now I'm thinking about pillowcases that could be made to give them for Christmas... 😉 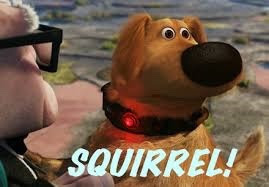 To quote Quiltdivajulie: A squirrel is a sudden distraction that pulls us away from projects already underway. Something so exciting that we drop what we’re doing to enjoy the unexpected. The term comes from the movie UP where the dog named Doug is talking and suddenly his head whips to one side and he shouts SQUIRREL and he’s off to chase it.

I don't even remember now what I was working on when a couple of squirrel projects distracted me. And they appeared almost simultaneously. First I cam across the pattern called Remixed Geese, from Robert Kaufman Fabrics. 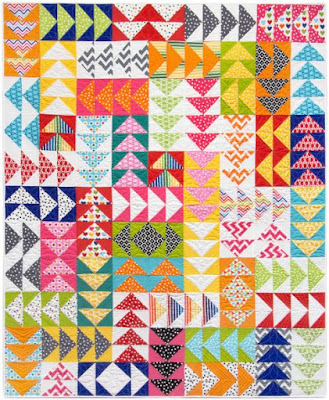 I've never been one to follow patterns. I'd rather design a quilt top on my own. This year, however, I've found following patterns to be about the only way to keep sewing. I need someone else to work out the dimensions and color palettes anymore. Not always, but more often than not. So sad. It's partly my health issues but I suspect it's also got something to do with my ever increasing age. I seem to be slowing down overall. Could be that over ten years of dealing with chemical sensitivities is taking a toll too I suppose. {sigh}

I won't be following the Remixed Geese pattern exactly, more like a guideline. I've decided to substitute white with black prints for the geese and use heavily saturated colors for the background patches. 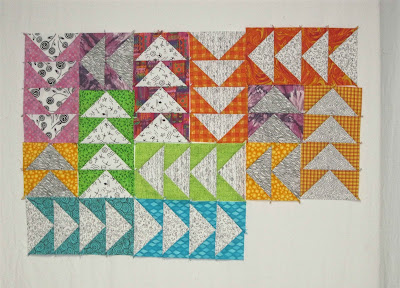 I thought these "families" of geese would be good to assemble between seams of other projects. Mostly I've found that once I get started on a set of geese I just keep going until every thing I've cut has been pieced. 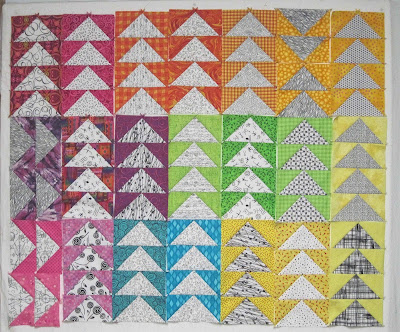 I still haven't been able to figure out precisely how many families I need for the layout in the original pattern. I'll just keep making 'em until I feel like I have enough to begin plugging them in as outlined.

The other squirrel works better as leaders and enders to sew between seams. I just have to keep enough patches cut ahead of time. 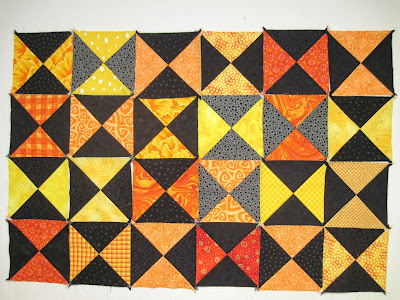 I'm calling this Glowing Hourglasses for the time being. Each hourglass block/unit will finish at 5 inches. They could end up being a quilt of their own or they might end up as a border treatment on a quilt yet to be started. For now I'm just making them. 😉

It's time to share what we've been doing with our scraps, hosted by Kate and Gun. It began with fabric scraps but others have since joined in, showing how they've put scraps from other media to use. As a general rule I tend to work more with what could be considered scraps than I do yardage so this is right up my alley!

The end of August and beginning of September were very difficult weeks for me in terms of my health. It was handy to have scrap patches already cut so I could sew mindlessly when I felt equal to sewing at all. It wasn't long before I ran out of blocks I could assemble without a lot of mental effort however. 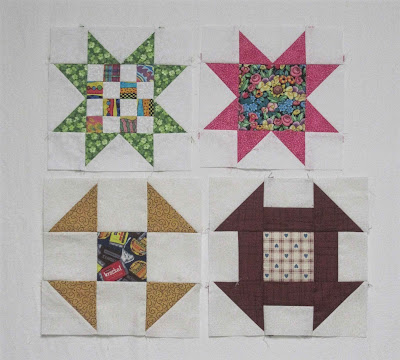 There may have been a couple of 6" Hole in the Barn Door blocks in addition to these eight inch stars and nine inch blocks. I must have put them away before I thought to take pictures.

There have been days when I couldn't even think well enough to pull together scrap blocks from the existing piles of pre-cut patches. So one day I spent some time cutting yardage for backgrounds. That allowed me to create this fleet of 6" Ships: 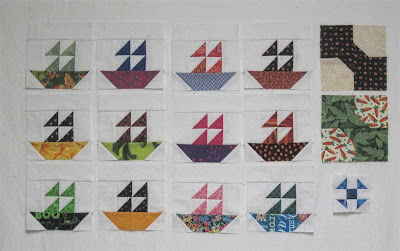 One tiny 3" Shoo-fly made it into the mix too. I don't usually work that small.

All of these blocks just go into my Parts Department until I have the motivation to build something with them. Now that the weather is cooler (so I'm not inclined to open the windows and let toxins in with the breeze) and we've had some real rain (to clean the air) I hope to be more productive again. I still have to tell you about the Squirrel Projects I've begun. In the meantime, have a gander at what the others in this group have been doing... 😉

Let's see if I remember how to do this...

I'm still using the auxiliary keyboard for my laptop, which makes things a bit more challenging. That has contributed to my radio silence of late but is not solely responsible. In spite of the cooler weather (for the most part) I've still had another whole week of zombie-ness. Zombieism? I'd like to say that better days are ahead of me but we all know by now that I can never actually say that with any degree of confidence. {sigh}

However, I am delighted to report that I've done some stitching. I've probably filled in another goose or two on the needlepoint case since our last check-in but more significantly... 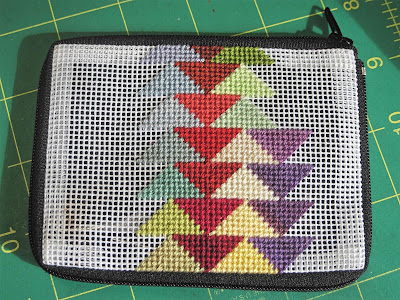 I picked up the block-of-the-month embroideries where I left off and have completed the next in the series! 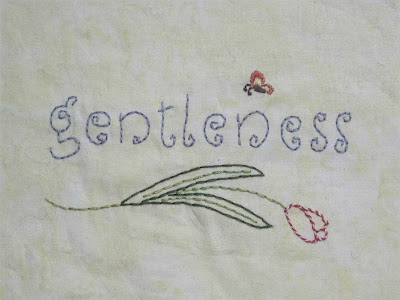 Given the theme for this block I chose to use more pastel tones of floss. When I'd finished with the butterfly I decided the tulip was too pale. I went back in and whipped the pale back stitches with a stronger pink. 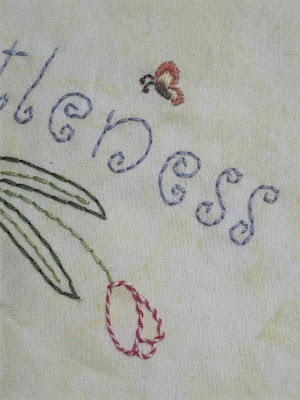 My husband claims he's never seen a candy cane tulip but I've seen some that put me in mind of peppermint candies so it stays as is. 😉 I have the next block traced off and ready to stitch, and then there's another block after that to trace off. I've lost complete track of how many more there are in the series.

This has become a great group of folks who enjoy needlework of various types. We check in with each other every three weeks, and that helps each of us to stay on track with our individual projects. I haven't been up to visiting anyone for the last couple of check-ins. I hope to remedy that this time around.