Fan in One Hand, Needle in the Other

So what do you do on nearly the hottest day of the year? If you're me you put a binding on a new quilt.

Our temperatures have been unusually low, even for the Pacific Northwest, throughout June and into July. The tradition around here is that summer doesn't really start until July 5. That sure held true this year. We were in the 60's on the Fourth, I kid you not. It was overcast in a lot of areas too. On the fifth it began to look more like summer at least. Yesterday we broke heat records and today is forecast to be almost as bad.

I heeded the warnings and did my piecing while the weather was still on the cooler side, which left me with a quilt to quilt and another to bind and a third I could layer and baste and then quilt if I were so inclined. (There's no ironing involved in those processes!) But then my neck and shoulders started complaining so I eased up a bit. Yesterday my body was feeling more supple again so I took the plunge and put the binding on my scrappy Trip Around the World quilt. 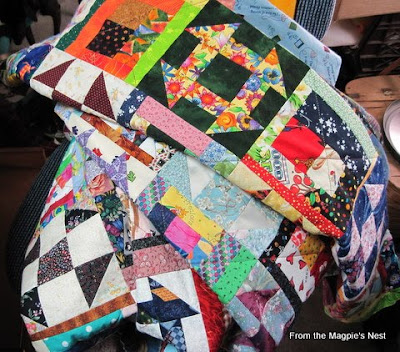 I've wanted to do a scrappy binding ever since I read about them on Finn's old blog. This was a perfect opportunity. I found some of the longer leftover binding pieces in darker tones and pieced them all together: 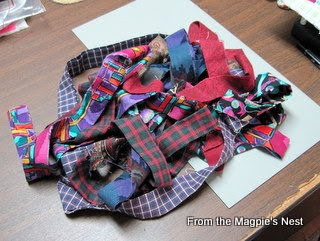 Then yesterday morning I machine sewed the binding to the quilt and in the evening I sewed it down by hand. I made sure to give my neck and shoulders a rest and a stretch frequently. 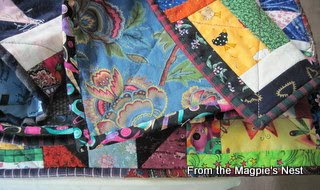 I don't have an overall shot of this quilt yet. I only eyeballed the machine quilting, and since I quilted through the liberated log cabin blocks there wasn't a definite midpoint to shoot for very often. Some of those lines are pretty liberated themselves! I figure once it's laundered those wobbly lines will be less noticeable. I'm trying really hard to avoid perfectionism with this quilt. Not going back to fix those curving lines that are supposed to be straight is almost more than I can bear!