I've been fighting a mental block where the chicken quilt is concerned. In addition to the feathered star block I wanted to feature... 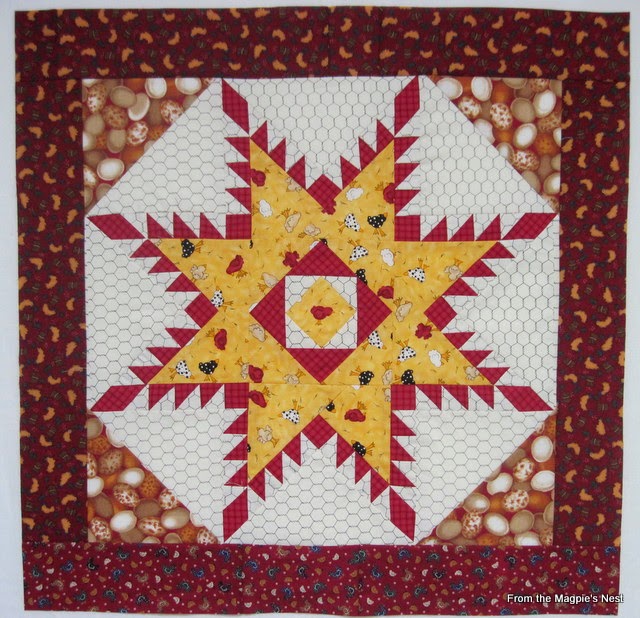 I have two 16" blocks I thought I would try to use:

This block pattern is labeled variously as Arrowheads, Stepping Stones, and Blackford's Beauty in my 1,001 Patchwork Designs book, depending on the placement of values within the block. 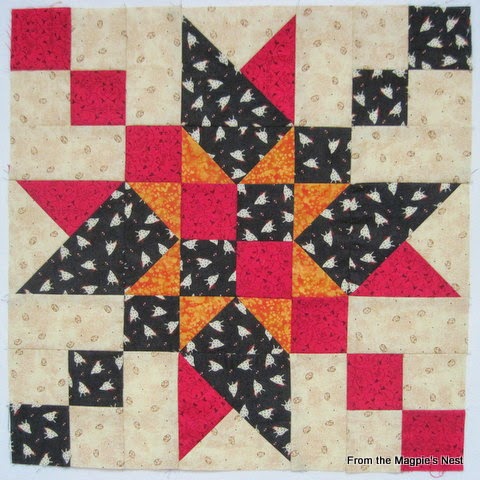 After putting blocks up on the design wall and taking them down again a few times I finally decided that the feathered star needed another border/frame around it before I went any further. Once that was done the 12" blocks almost positioned themselves around the star! 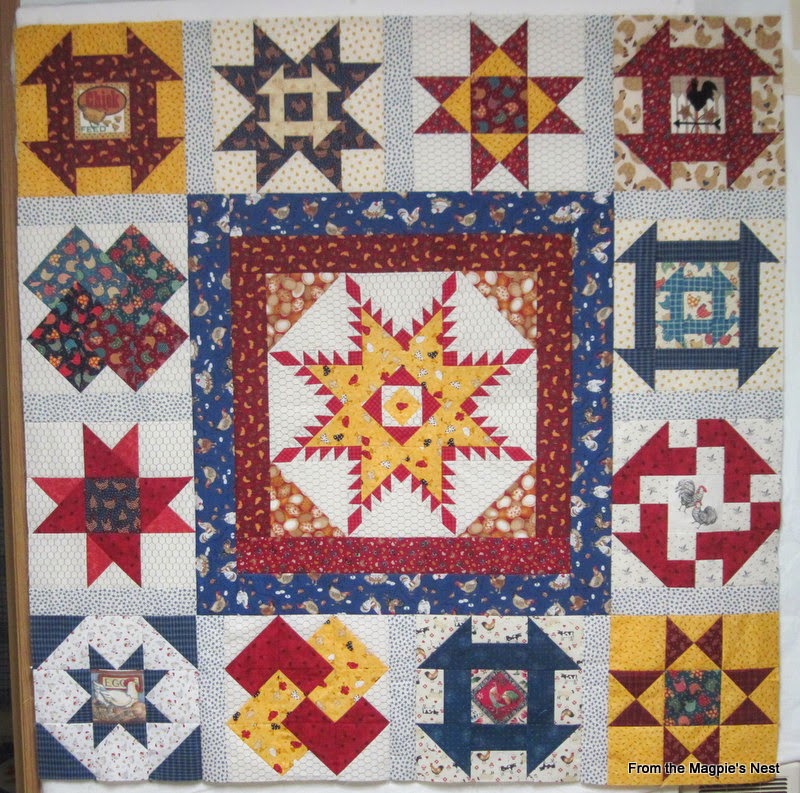 Of course, adding that extra frame required some sashing strips between the blocks to make them fit around the star neatly. Finding the right print for that purpose was another struggle. Up close I think the print I used is a little busy but it will  have to do; it's the best I could find in my stash! I may be able to tone it down a bit with whatever happens next. And what happens next may not be the Blackford Beauty blocks after all. They will make the quilt longer/wider than I want it to be. So it's back to the drawing board again. But at least there's been some progress!

Blocks of the Month

It has been a rough couple of weeks. Not all of it, but enough to keep me from posting - or even sewing much. I've completed a needlepoint cosmetic bag and have another one about halfway done. But no Bead Journal Project and no work on quilts in progress. {sigh} There have been a couple of bright spots however. :- )

My local quilt guild does a block of the month lottery most of the year. I don't participate in the block of the month all the time but every once in a while there's a block that especially appeals to me. Such was the case in May. The block request was titled "Spring's Flower Garden." I know the block as Seesaw. This is one where the placement of values within the block makes a big difference in its appearance. I don't think I have a picture of the Seesaw version to share with you. Let me go look...

Nope. But here's the block I made for the drawing: 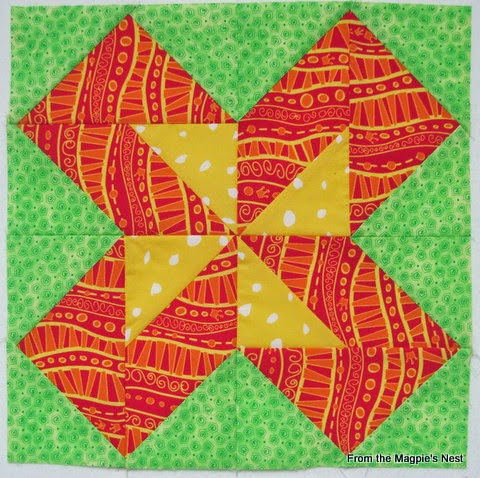 That was so much fun to make that I did another one for the chicken quilt I've been slowly building: 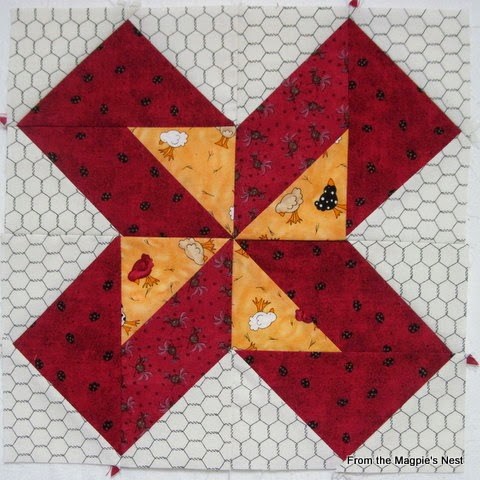 Imagine my delight when my friend C~ informed me my name had been drawn as the winner of all the blocks at the last guild meeting! :D There were 21 blocks in all: 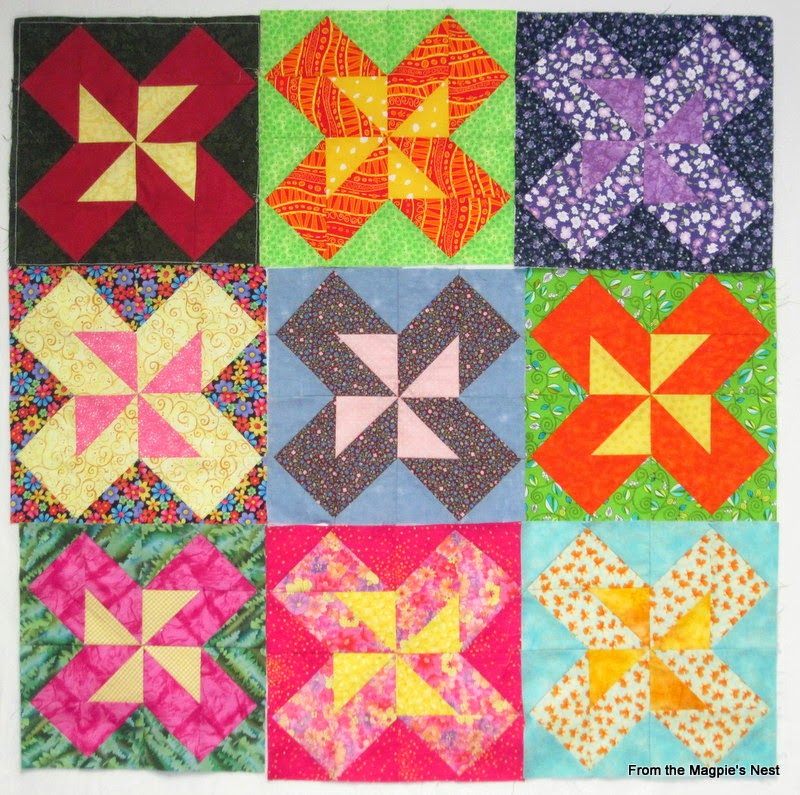 One block is noticeably smaller than the others. There was a paper foundation piecing option for creating the blocks and I suspect the maker of that block did not make her foundations quite large enough. Another block has seams coming apart right at the edges so those will have to be reinforced. The big question is, what to do with the blocks? I could make something out of the existing blocks and give it away or I could make more blocks and have a happy new quilt for myself.

Just for fun I made a couple more blocks to add to the collection... 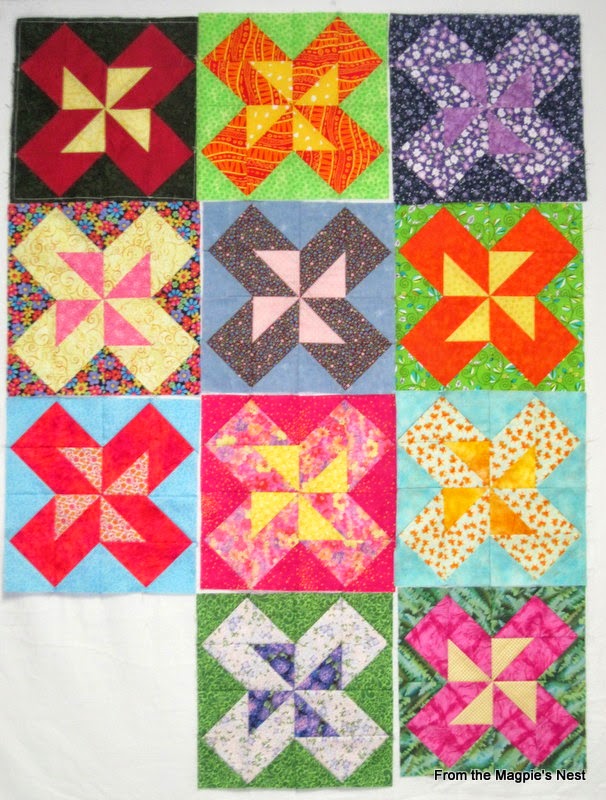 They are the bottom two in the lower left corner of the picture above.

These are such pleasing blocks to make that I will probably make enough to have 30 blocks total. I'm pretty sure now that this quilt will be for me, at least to begin with. Then this morning it occurred to me that I could call it Birthday Bouquet since June is my birth month! Now I have an excuse to keep working on this project instead of building up the chicken quilt further. ;- )

Oh, and the block of the month for June is to use any technique to make a block that will finish at 12" for the "Dog Days of Summer." Since I have several dog prints in my stash I felt compelled to participate again. I started out by making a couple of 6" Double Pinwheel blocks and then combined them with simple four patches that feature fussy cut dogs. 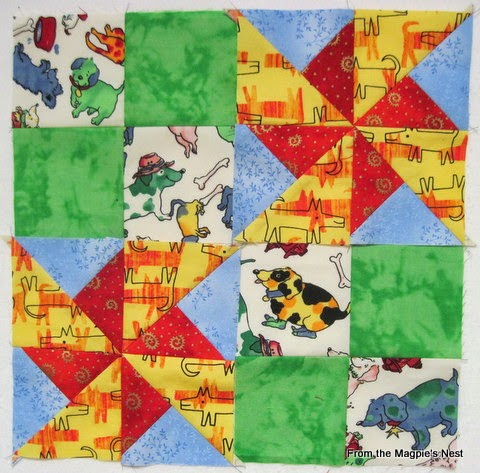 I wasn't happy with all the different colors. It wasn't cohesive enough. So I remade the double pinwheel blocks: 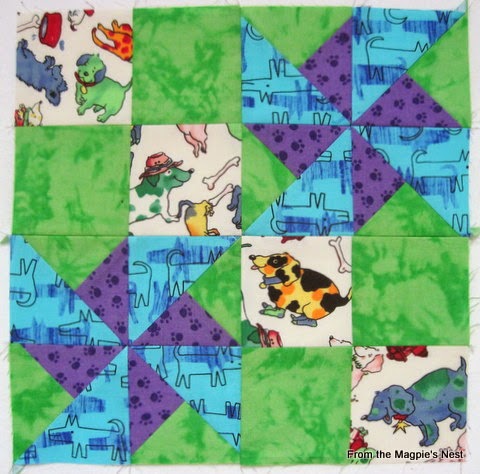 Inbetween steps of the Portal wedding gift quilt (in the last post) I needed something to sew that didn't require a lot of mental effort. Among the many palette options available on the shelves of my fabric stash were some darker batiks that had been around for too long. And a few newer ones of course!

The big question was which technique to use. I didn't want to have to think much about value placement within blocks or arranging the blocks after they'd been assembled or anything really. Some people can sew scraps mindlessly. I've found that I can't, at least not very often. It's not a relaxing process for me. But I do enjoy selecting a short stack of prints to layer and cut and shuffle. So, crazy blocks or string blocks?

In the end I settled on string blocks. I cut my starter pieces 10" x 12" and layered five prints per stack. Originally I thought I would just make a strippy quilt sort of like my Reading Material quilt. But as soon as I started putting blocks up on the design wall some of them went vertical: 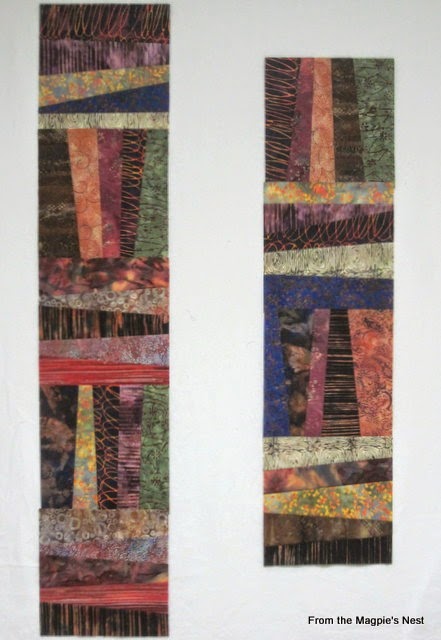 I found that this time I liked that better than having all the strips going horizontal. I ended up making 50 blocks that would finish at 9" each. Other than the strippy format I didn't have a specific plan for setting them when I began. As usual, my target was a top in the 60" x 80" range. It took me a few days to come up with a way to achieve that goal. The breakthrough moment was when I thought to make two columns that were two blocks wide each: 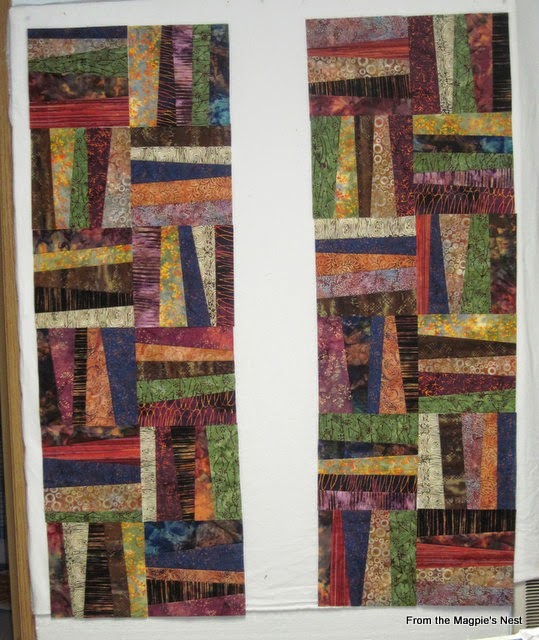 And separate them with a single column of single blocks down the center of the quilt. 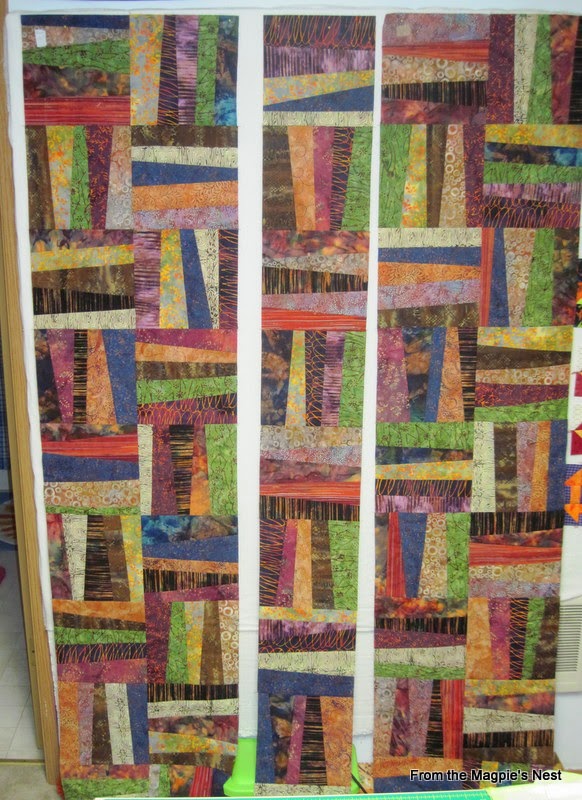 The columns had to be created in halves, of course, because my design wall isn't big enough to accommodate the length I wanted. 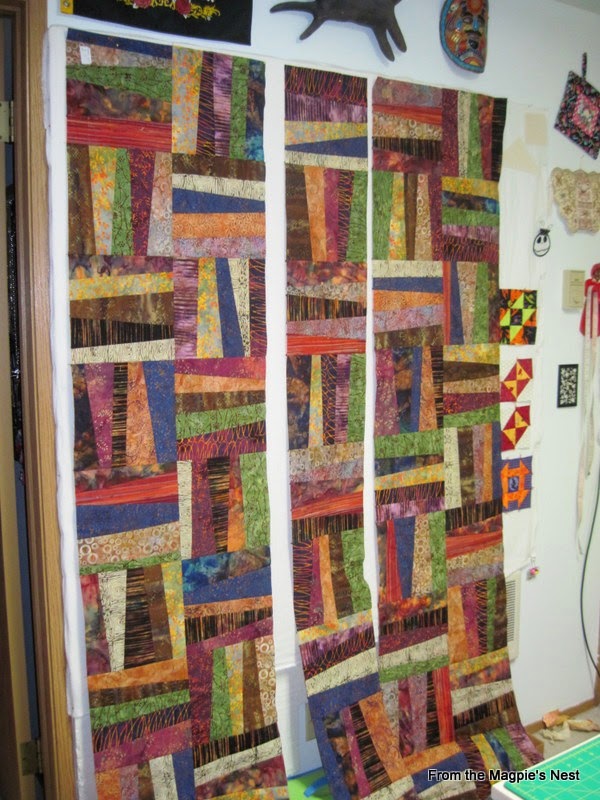 I can't get the whole thing in the picture no matter what I do!

After the columns were built all I had to do was find an appropriate color for the sashing and border strips, with enough yardage to go the distance. I was a little surprised to find that I had choices. I have not been in the habit of buying yardage when it comes to batiks but there were two orange pieces that were both big enough. 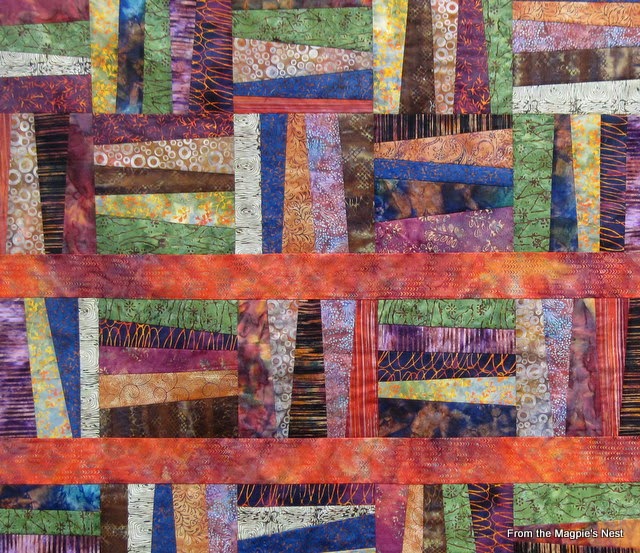 Interestingly, they were both oranges that meld into purple areas. I chose to use the older of the two prints.

Here's the final product, courtesy of my son and one of his friends: 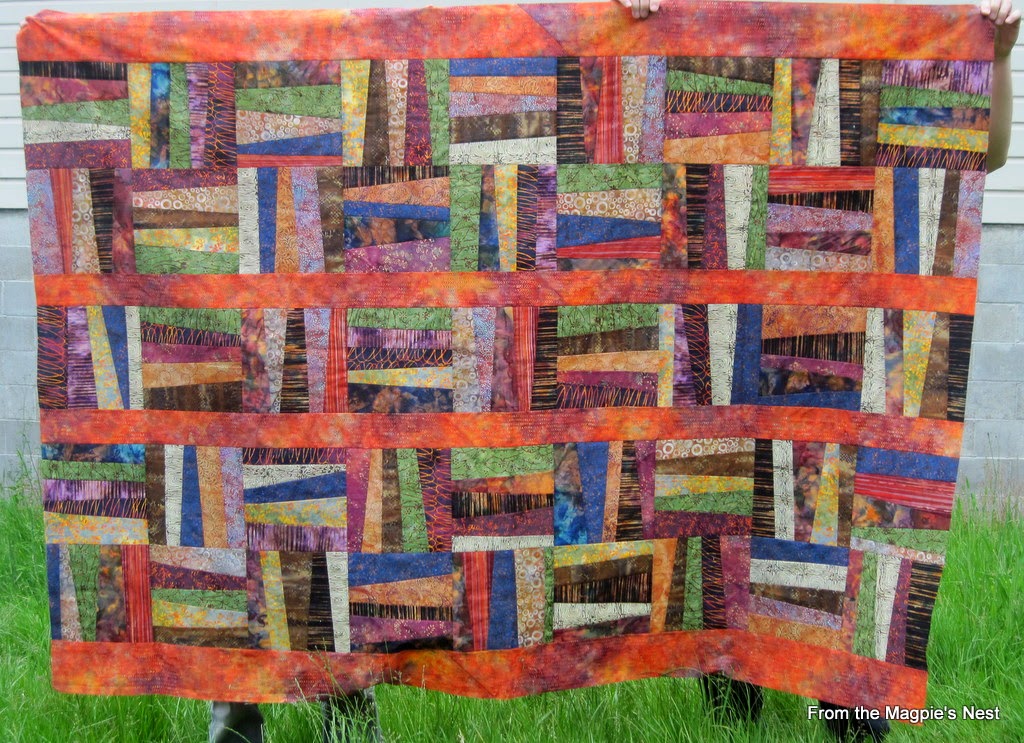 I already have a back made for it but have to get some batting before it can be quilted. It also needs a name. I think of autumn bonfires when I look at it but so far I haven't been able to come up with a name or title that doesn't have a negative connotation. Guess I don't read enough poetry!