At this point in the process I had two rows of scrappy six inch Bow Tie blocks, the 24" panel, and one row that's 12" high. I wanted another 12" row to balance everything out. I started with the liberated star you see on the left in the picture below. This was another of the blocks I'd made for Sunflower's quilt that didn't make it into the final version of the quilt. My friend C~ gave me some blocks she'd received in an internet exchange, one of them being the paper pieced house in the middle of the row. I had to frame it up to 12" but that wasn't a big deal.

I made the six inch Pinwheel blocks out of triangles I'd cut from scraps awhile back. I thought they were going into the row I showed in the last post but they didn't fit in. So I started with them and with the liberated star block and worked from there. I made the dark star on the right end specifically to get the width I needed for the row. A few more of my scrappy blocks, some rearranging, and this is how the row turned out:

Actually, you know what? I took out the black pinwheel on the bottom left and replaced it with a butterfly block after I took this picture. You'll see it in the end. Meanwhile, here's a close-up of that fun house block (sorry it's a little blurry): 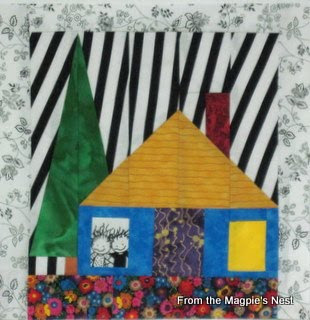 And this was one of my first house blocks ever: 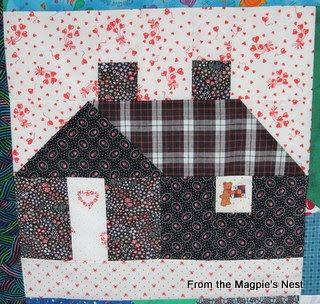 The preponderance of house blocks in this top is what inspired the name for the quilt. Bet you hadn't already figured that out!
;- )