It's been another of those stretches where every other day brings a new toxin into my world. I just about recover from one and something else upsets my system. Can't win for losing!

Right before I became incapacitated I decided to try to use up some red scraps and white and black scraps by making stars. My inspiration was Bonnie K. Hunter's Random Ohio Stars quilt. 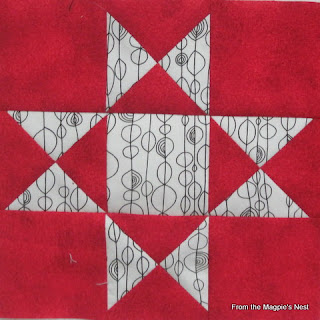 It quickly became apparent that few of my scraps were actually big enough to make 12 inch blocks. But after making them the six inch versions felt awfully fiddly. 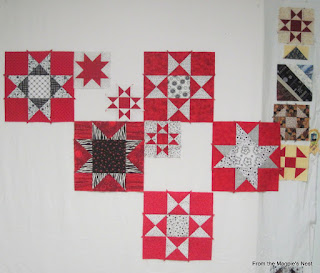 Very soon I was making Variable Stars in addition to the Ohio Star blocks. 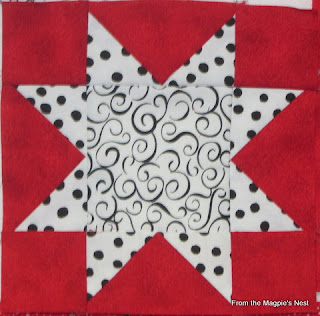 I also branched out to blocks with black in them. 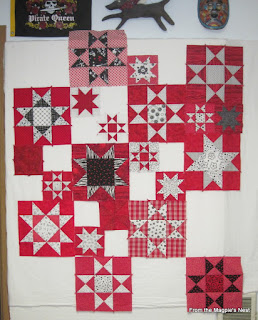 There have been a few more blocks and parts made for this project since the last photo was taken. I've spent an awful lot of time playing computer solitaire though. I ran out of mindless needlepoint to do and couldn't make my brain focus to read. On a happier note, I did manage to put sleeves on five of my recent quilts (son put sleeves on two more) so they can be displayed in a local quilt show next weekend. I had no idea I could pull together that many freshly minted quilts to show at one time!

I made a comment in my last post about the fact that I didn't need another pair of embroidery scissors. That caused me to wonder about how many pair I actually have. I'm pretty sure I have accounted for all of them, and it wasn't quite as bad as I feared! The very first pair I remember buying would be the simple ones in the upper left. They still have the sharpest point. The swordfish is my newest acquisition. I don't think I've ever owned a pair of stork scissors so when I saw this inexpensive black and white job a few years ago I snatched them up. The leopard handle scissor are Gingher's. They probably have the best blades, although they need sharpening.  I will confess to having three of the folding Slip-n-Snip scissors. There was a time when I couldn't find either of the two pair I knew I owned so I had to invest in a third one. Now I keep one in the pocket of my needle case at all times. :- ) 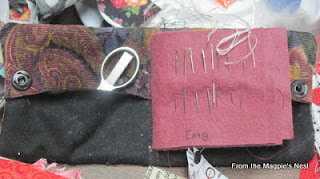 On another front, I believe I mentioned that I have been binding quilts. I had a stack of four finished before I started giving them away! I don't think I've ever had that many quilts done at one time before. 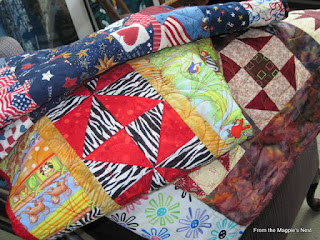 Two are the lap quilts that will eventually go to the Alzheimer's Disease Co-operative Study. One was the almost twin size quilt I gave to my daughter for her birthday. The fourth was the baby quilt. I had my son practice hearts on that one: 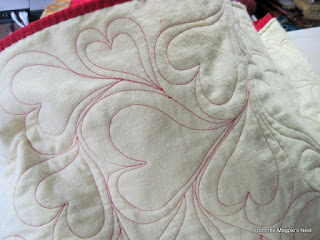 I just received word that the new mom burst into tears when she saw the quilt for the first time. Awww.... 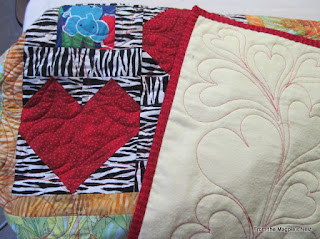