Well, shoot. I've loaded the pictures in reverse order again. I wonder whether a sticky note on my monitor would help me remember...

I know I said I was going to show you the blocks for the new Foster Quilt I'm making.

Instead I'm going to show you the preemie quilts I've been finishing up. Except that I'm going to start with one I haven't finished yet. 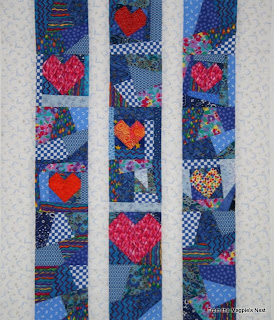 I don't think I showed this top when I originally created it several weeks ago. It started with a set of small crazy patch blocks I found in my orphan block box. I pulled out some leftover hearts too. There still weren't enough blocks for what I wanted to do so I made a few more crazy blocks, using some of the same prints that were in the original blocks. Most of the crazy blocks were made using the stack and shuffle method while others might be considered crumb blocks. I haven't backed or quilted this one yet. It's next in line.

This second quilt began as a pre-printed panel. I added a strip of green around the panel to bring it up to size but after that all I did was back it and quilt it. The artwork may look familiar. There were cameos of dinosaurs along the selvage edges of the panel. They were what inspired this pillow top I created a little while ago (which has actually become another orphan block in my collection). 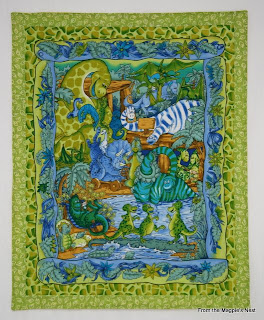 I used a flannel monkey print on the back and then also used it on these Precious Moments quilts: 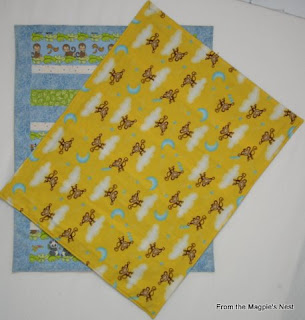 These quilts are not identical, but awfully close. Maybe they will be presented to a pair of twin boys :- ) 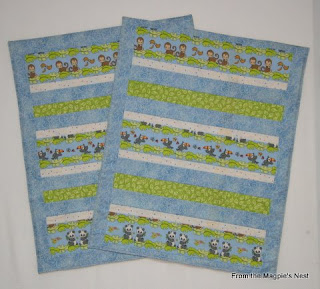 And maybe I'll show you the new blocks in the next post!