For starters I'm serving up cherries, seafood, grapes, and peas and carrots. 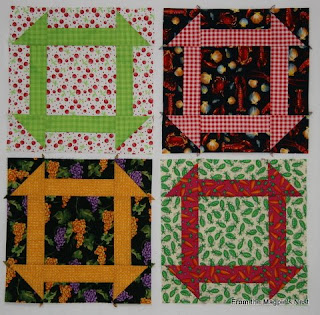 When I started making these blocks for a new Foster Quilt I think I had it in the back of my mind to only use each food print once. I certainly have enough fabric to make a good size quilt that way. But as I've worked with the different prints I've discovered other combinations I've wanted to try. So far I think I've used two prints twice. Whether all of those blocks end up in the final edition remains to be seen. I like to have more blocks than I need when I'm working this way so that I have options when it comes time to set the blocks together.

For example, I used the hot pink carrot print (the lower right block above) with a marbled green in a previous block. Then I found the peapod print and just had to put peas and carrots together! In the upper right of the picture below is a block featuring breakfast foods and a newspaper. I'd used that before, but the print I used for the 'frame' was the same scale as the breakfast print. There was sufficient contrast in color to make the block work so I moved on. Yesterday, however, I found this black with tiny little muffins printed on it. Perfect for breakfast! (Although they could be cupcakes; it's hard to tell.) I made a second version of the block. We also have cherries and raspberries (not sure that would work in a dish!), apples, and eggs (which look a little like rocks to me so I included some chickens as well). 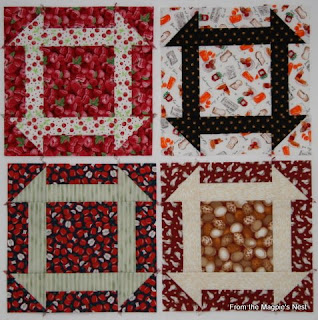 I don't know if I mentioned it or not, but my intention when I started making these blocks was to just make them inbetween work on other projects. They were going to be "fillers" to keep me sewing when there was a lull in the action. Well, they've taken over. I can't even think about the other projects at the moment! And there may be more than one Foodie Quilt before I am done.
;- )