I'm happy to report that I've been Missing In Blogland because I've been sewing. The veggie doll quilt (previous post) is not done but the blocks are at least sewn together. Most of my time and energy this week has been put into a quilt top that I will be donating to a local group making quilts for foster children in our area.

I didn't get the photos loaded in the right order. In the interest of keeping them clickable for enlarging let me explain them in order of appearance.

When I found out about this project I went through what remains of my collection of orphan blocks. I only found four that came close enough to measuring 12 1/2" to use in this particular quilt. That meant I had to come up with eight more blocks to meet my goal of a total of 12. I created these three blocks mostly from scraps that were at hand: 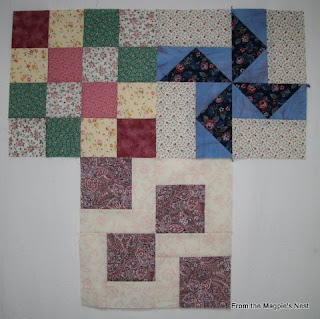 These four blocks were made from smaller orphan blocks of my own. The pink star, for example, is only 5" square. The Shoo-fly blocks next to it were 6". The Bow Tie blocks sewn together into a circle were also 6" blocks. The 'bowl of flowers' is a block I created for a challenge but wasn't happy with at the time. 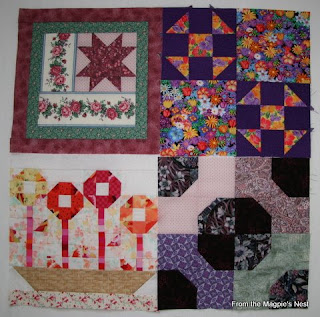 These four blocks were given to me from someone else's stash some time ago. They're the ones I started this project with and sort of set the tone for this quilt. 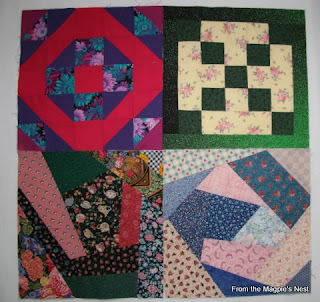 When I took the pictures you've just seen I still needed one more block. I turned to a favorite pattern, also using mostly scraps: 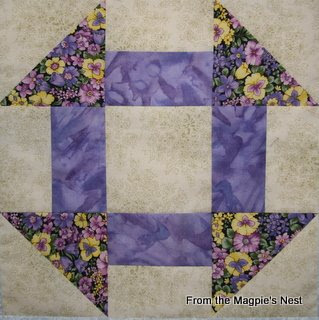 Twelve blocks make a top that measures 36" x 48". I wanted to make something big enough for an older child so sashing was an obvious solution. It took some time, but I finally found a light blue toile print that I bought for some other project but that didn't work out. There was enough to sash these blocks though! 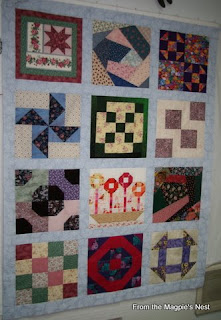 Yesterday I had to dig around some more to find anything big enough to use for a border. It's only recently that I've begun buying yards of fabric, and then only because I have to in order to get the sale price, so there just isn't a lot to choose from around here. I'm on a short deadline too so I really didn't want to have to go shopping. (Did I really say that?!) Eventually I found two potential contenders. Neither was "the one" however. One more time through the stacks revealed a piece of fabric I thought was only a small piece. Turns out it's almost a full yard. Perfect! It still won't be a large quilt, but at least it will be more than baby sized. I should be able to get that border on this weekend and then I can turn the top in and go back to finish the doll quilt. :- )