Remember those birds I made a few weeks back for the Birds of Change Exchange? My new birds arrived a few days ago: 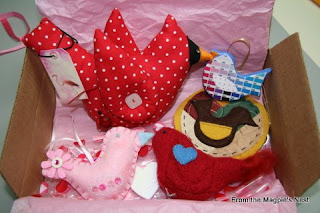 They are all so much fun! And so different! I need to take individual pictures of them for you to see all the details. One is wooden, another is knitted and has the cutest wire feet. The wings on the big cardinal move. I'm so happy with them all! Haven't decided yet where they're going to live. I'd like to keep them together for the time being (in one room, in their own vignette). It would be fun to hang them somehow, from the ceiling or as a sort of mobile. For now they're still resting from their long flight north. They seem to get along together very nicely.

Meanwhile, my flannel doll quilt has been appropriated by Raggedy Ann and Andy. I still haven't decided whether to tie or quilt it (or neither), although I'm leaning towards tying it with cotton floss. Red, most likely. 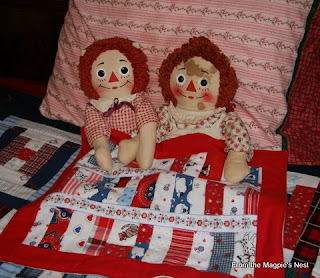 Poor Ann. I wanted her so badly for my 9th birthday. I felt like I was getting too old for dolls but I'd never had a Raggedy Ann and loved the books so she was on my wish list that year in spite of my ambivalence. My birthday is in June and we had a picnic party outside. Shortly after I opened the box she came in someone accidently spilled something on her face - I don't know what. I was heartbroken and she's been scarred ever since. But she still loves me anyway. It says so right on her heart. And I obviously love her because I still have her (and Andy, who came later). I have learned that there are some dolls you are never too old for.
When I saw how much Ann and Andy liked the flannel quilt I thought maybe I could make another one for my friend. Didn't feel like playing with the flannel anymore though. I went through my orphan box, then my bin of abandoned UFO's. I found some Broken Dishes blocks that were an odd size - which could explain why the project had been abandoned. They are from the mid 1990's. It was a struggle to find fabric in my stash to make more blocks; I had apparently used everything up when I put the project away the last time. But I found some newer prints that worked and I really like what I have going on now: 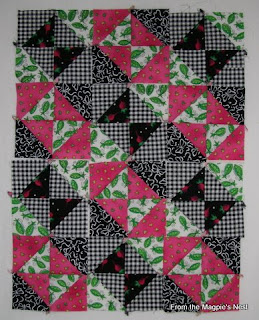 This will be bright and fresh, and in spite of the vegetables in the blocks I think some little girl will enjoy covering her dolly with this quilt when it's done :- )