This is what I had when I got stalled on this quilt for a little girl. 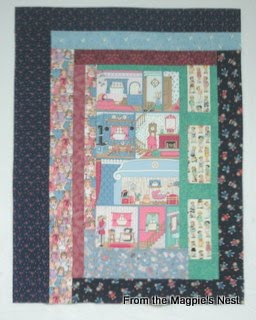 Overnight my subconscious must have been working on the problem of what to do next because in the morning I thought of these blocks: 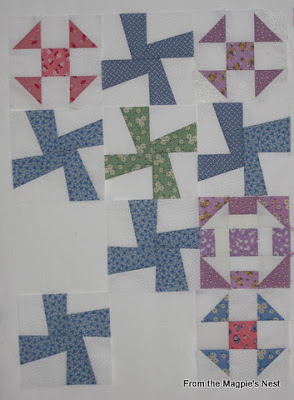 The 1930's reproduction prints in these blocks have just the right feeling of youth and playfulness. Those navy strips were giving the quilt a much more adult, serious aura and that's not what I wanted. I determined that the wide blue border on the left had to be cut down too, to keep it from overwhelming the quilt top. Once I did that it became obvious where the Shoo Fly blocks would go. To keep the juvenile quality to the quit I used the cloth doll print in place of the floral when I bordered the blocks. 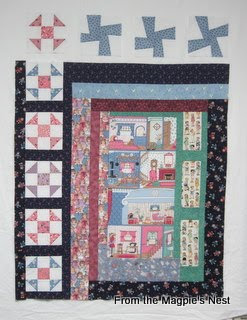 It took me a while longer to realize that I also wanted the Windmill or Pinwheel blocks in the quilt. Finding the right thing to sash them with was another challenge. What I used is a small-medium scale leaf print with just the right shades of pink and blue. It looks better in person than it does in this photograph, trust me. After that was the issue of a bottom border to get the length I wanted. I felt more of the Shoo Fly or Windmill blocks would be too ordinary, too expected. So I got down my orphan block box to see what else there might be. I found baskets. 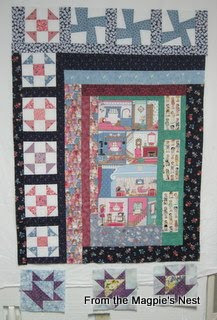 Eight inch baskets. What to do to fill out the row? I had ten inches overall to fill somehow. I considered five inch blocks, but then I wondered why I had to divide the space evenly. Why not shift the blocks a bit and have six inches between two and four inches between the other two? It would be a fairly simple matter to make a couple of Rail Fence units (or just strata if you like) to fit into those spots. 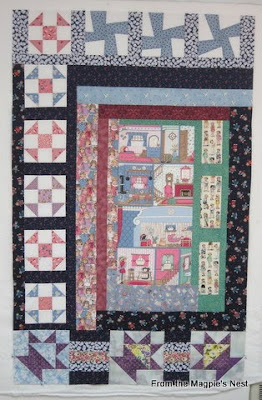 The hardest part was deciding on what prints to use in the units. Pretty quickly I realized I had just enough of the cloth dolls and the leaf print to use them again, and doing so provides continuity. It was the center strip that gave me fits. I tried a print with a white background and felt it stood out too much. I tried a yellow, with the same results. This pink pansy print seemed to do the trick.

Finally I needed 3" all the way around to bring the whole thing up to the 40" x 60" I was shooting for. Of all the fortuitous things, I had a companion print to the little navy blue floral that fit the bill. Same colors, same flowers, just in a larger scale - very appropriate for a quilt of this size. 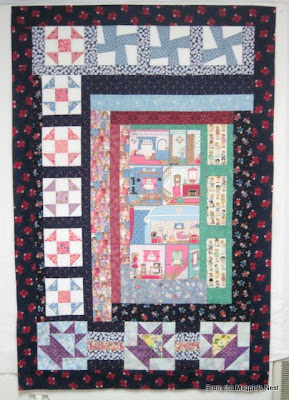 Whew! It's done. And I found the cutest print on sale for the backing. I'll have to show that to you later though.

Now I'm off to build a quilt for a little boy using the same process. This is fun!
Posted by Magpie Sue at 9:37 AM