We got a call in the middle of the night Thursday -- Friday morning really. DD was in labor and going to the hospital. Next thing we heard she was being taken by amublance to the nearest hospital with an neo-natal intensive care unit (NICU). We opted to get as much sleep as possible before making the trip down, about 30 miles south of where we live. 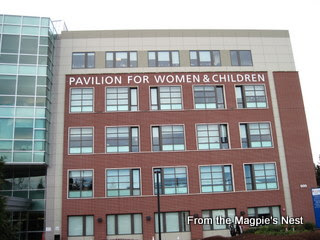 She was still in labor when we arrived and the babies were doing fine. We waited... and waited... and the contractions stopped. DD has done this before, with her other two pregnancies. She'll labor for a day, then stop for 24 hours or so, and then go into hard labor and deliver. The doctors decided to put her back on the anti-contraction medication and keep her in the hospital. Maybe until she finally hits the 36 week mark. I half expect to get a call later today saying that she's back in labor or has already delivered the twins. I won't be going back to attend the birth. The hand sanitizers and other chemicals in use in the hospital were too much for my system. I was fortunate that my husband was around the other day so he could get me home after our three hours or so in the birthing room and hallways. I will, however, make the trip again to see the babies as soon as I can.

In the meantime, in my effort to figure out how to control the scrap population here in the Magpie's Nest I have been playing with the leftovers from Sunflower's quilt. I've been cutting 3.5" squares from bigger remnants ever since I had so much fun making my Fungly Quilt. I'd built up quite a collection of them so I used those in conjunction with the larger scraps to make these liberated stars: 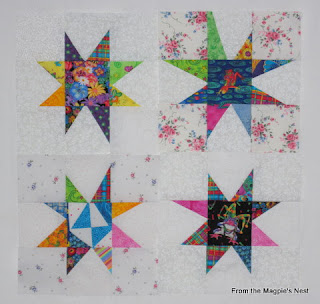 I had some offcut triangles I sewed together too, and I made a few crumb blocks. The two you see here are 6.5" in their raw state. 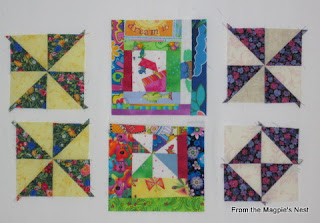 I have more bits that have been pieced together but aren't really big enough to be anything yet. I suspect that my Parts Department is going to look slightly different from Gwen or Freddy's Parts Department. Theirs consists of completed blocks, like my orphan blocks. I think mine is going to consist of pieced bits that could become blocks.

Oh, and my copy of Liberated Quiltmaking II arrived in yesterday's mail. Hurray! I can't wait for my son or DH to get it taken apart for me. I may even risk the fumes to take a quick peek. The wiser course might be to sew some more scraps together while I'm impatiently waiting... But we can't be wise all the time, right? ;- )