It's been a few days, hasn't it?! I've lost some time due to chemical exposures - unavoidable at this season of the year. I'm in recovery from one right now. It happened here in my own home too. DH brought home a frozen lasagna the last time he went grocery shopping, thinking it would make good lunches at work for several days. It will. But the directions said to leave the plastic film in place while it baked. The heat of the oven caused the plastic to release fumes that then took me down. So here we are.

I managed to participate in the Toy Society's annual Christmas Drop on Saturday. It wasn't easy, let me tell you! To begin with it was raining. Not heavily, but enough to make everything wet. I wanted to drop my dog outside the public library. Turns out there's no cover to speak of outside the library. Everything is out in the weather! I had no idea how busy the library might be on the Saturday before Christmas either. It would have been ideal to get there before the library opened for the day but I couldn't make it that early. I got over there within the first hour of their opening but even then they were pretty busy. I drove around the block a couple of times in hopes of catching a quiet moment to execute my mission but it never happened. Finally I headed back home with the dog still in my possession. I had inhaled enough exhaust fumes at that point to set me back for the day. 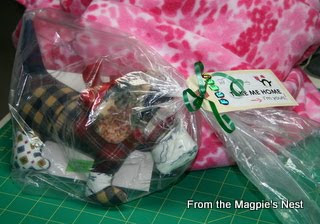 At home I tried to work on the preemie quilts for my daughter's babies. I had decided to try something a little different for this pair of quilts. It's a technique I've used before, so not something completely foreign to me, but I wasn't having fun. I wasn't enjoying the process and I didn't like what was developing. So I took all that off the design wall and wrapped some gifts instead.

Late in the afternoon I remembered that I still had the doggie to drop off for the Toy Society. It had stopped raining for the time being and there was about an hour before they closed up for the day. To my dismay I discovered that the library was just as busy in the afternoon as it had been in the morning. Once again I drove around the block a few times and then finally parked in the small parking lot to just wait it out. Eventually there was enough of a break in the traffic that I felt I could stash the dog under my coat, walk towards the front door, squat down next to the big metal box for overnight deposits as if to tend to my shoe, slide the dog out from under my coat, straighten up again, turn around and go back to my car. I did not get a photograph of the drop site this time. I felt fortunate to have merely made the drop as inconspicuously as possible! Of course I have no idea how inconspicuous I really was. And I didn't hang around to see whether the dog was found right away or not. I figured if no one claimed him by closing time certainly one of the librarians would find him. And in that particular spot he was out of the weather as much as he could be. 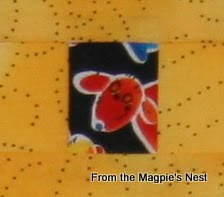 Yesterday morning I journaled on paper a bit about my frustrations with the preemie quilts. That seemed to clear the pipes enough for me to begin again, working the way that comes naturally for me. By the end of the day I had one top complete (it still needs to be backed and quilted) and patches for most of the second one on the wall. There are still Christmas gifts to be wrapped, and no one has had a Christmas card from me yet, but what do you want to bet that that preemie quilt gets sewn up before anything else gets done? ;- ) 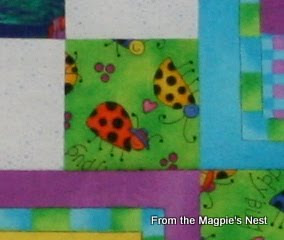