It looks like I'm going to have to put Sunflower's quilt on the back burner for a bit while I create two special preemie quilts. There is a distinct possibility that the twins DD is carrying will make their appearance between now and Christmas. In this case, not a happy thought. DD is all of 28 weeks along. It would be so much better for everyone involved if those babies could just stay where they are for another month. At this point every day, every hour, becomes precious. I will gratefully and happily accept any and all prayers on our behalf. And I thank you for the support you've already expressed.

Inbetween phone calls and emails yesterday I managed to get more blocks made for Sunflower's quilt. I don't even know how many I made. I do know that I'm very close to having enough for the bulk of the quilt top. 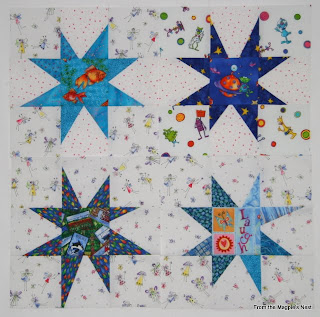 First we have a quartet of blue blocks. Sunflower was born in Washington State so of course I had to use a patch of this print that commemorates the western side of the state. And it only made sense to surround it with a raindrop print! 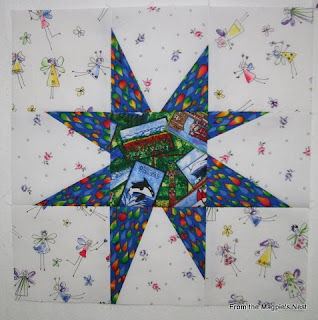 There were some other folks who dropped in to keep the fairies company too: 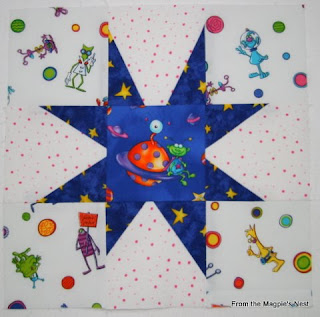 I think the spaceship print and the aliens are actually from two different lines of fabric. The blue is from a fat quarter I just picked up the other day; I had the white in my stash from a sale some months ago. When I remembered the white alien print I couldn't resist trying them out as background patches. ;- ) 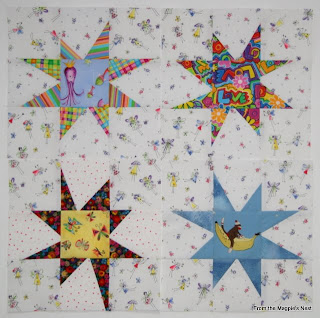 I think that's the third block I've made from a fat quarter of the 1960's psychadelic print. There are scraps enough left for at least one more I bet.

I have a few more blocks in pieces at the sewing machine. I'll probably get them assembled and then turn my attention to the preemie quilts for DD's babies. I never expected to be making preemie quilts for my own children's children.