After the false start last week with the big girl quilt for DGD #2, hereinafter referred to as Sunflower, it took me a few days to get my courage up enough to try again. I really wanted to stick with the liberated stars (and you guys seem to like them!) so I figured I'd start with some 12" blocks and sort out the format of the quilt later.

I believe I mentioned in the last post that I found a couple of prints I thought might work as backgrounds when I went to the local quilt shops the other day. One is the stick fairies you see on the left in the picture below and the other is a pink micro-dot on the right end of the spread. The blue fairy print is something I picked up online recently and the bigger pink dotted fabric is yardage I had in my stash. It was one of those pieces I bought with the Black & White & Pink friendship quilt in mind but ended up not using. 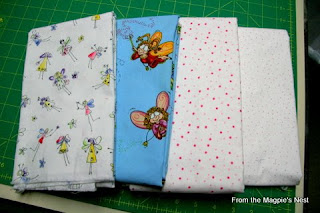 In DD's family you can't go wrong with pink and fairies. This is what I have so far: 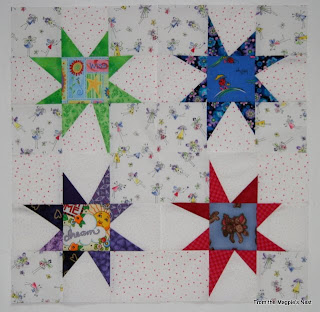 At this point I haven't entirely decided whether to keep the background patches consistent or not. The micro-dot drops out pretty significantly next to the other two prints. I kind of like hit-and-miss but it may create problems later on when I'm trying to set the blocks together. It would help if I could make up my mind about a layout. Part of me wants to do a strippy set, just for the heck of it. That raises the issue of fabric for the long sashing strips. Of course the simplest thing to do, since I'm under the gun in terms of a Christmas or New Year's deadline, would be to just crank out blocks all the same size and then set them together, side by side. And that may very well be what happens. ;- )
In non-quilty news, we brought home a Christmas tree last Saturday and only just got it decorated today: 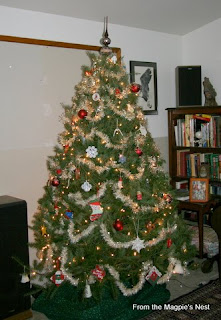 Each year we seem to be more selective about which ornaments make it onto the tree. However, as I look at the picture I see a bare spot or two that may need to be filled!