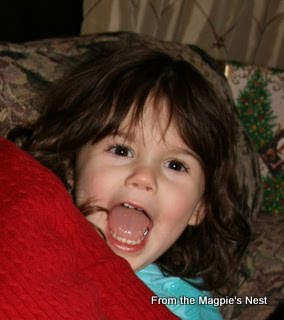 Doesn't that face just say it all?
We had a lovely time at DD's on Christmas Eve. Her house was much less toxic than the last time. Along with other gifts I presented DD with this stack of receiving blankets. I made four of them and the other two were made by my son who sews. 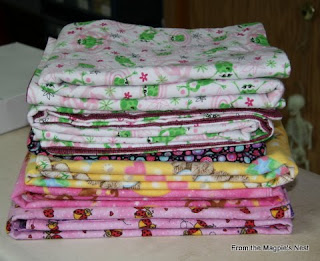 I also managed to include two preemie size onesies. They're not easy to find! (Especially when you have to rely on the shopping abilities of a young man.) Of course there was also the piece de resistance, the preemie quilts: 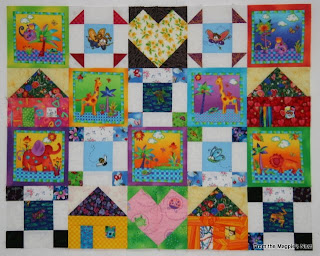 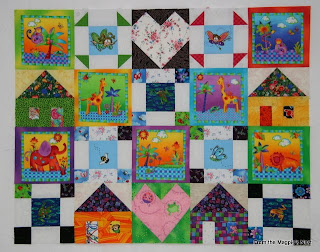 I think both of these pictures were taken before I backed and quilted the tops but they look essentially the same. I just turned them pillowcase style so there's no binding or anything. You may notice that I managed to include those animal panels DD had given me to incorporate into Sunflower's quilt. Ta daa! There are more panels left over so there may be additional linens for the twins that feature the jungle animals. I have no specific plans at the moment.

DD seems to be holding her own. She's still having contractions periodically, and they're more intense, but so far there's been no reason to make an emergency trip to the doctor or the hospital. Tuesday will mark 31 weeks.
Meanwhile, I think I had the least toxic Christmas I've had in years. Gifts were purchased early enough, for the most part, so that they could off-gas before being presented on Christmas morning. The worst offenders were the items of clothing. Those that are not going back to the stores have been laundered and now are fine. The biggest surprise I had was the pocket size digital camera my DH gave me. We've been jointly using his digital SLR but it's really more camera than I want to cope with. I will probably continue to use it for my quilt photography but now I feel like I have more freedom of movement (such as it ever is) with the smaller, lighter equipment. Woohoo!
Posted by Magpie Sue at 10:10 AM