This ought to be interesting. DD called maybe an hour ago to say she was having contractions and needed to go to the hospital. Her babies are not due until at least mid-February. It takes us 45 minutes to get to where she lives. My husband and son left about half an hour ago for the hospital so they can collect the two granddaughters and take them home and put them back to bed if possible. DH has been up since four this morning and now will be up at least half of this night too.

My body won't tolerate DD's house. I can't go and be Grandma for the two older girls. I have to sit by the phone and wait for news. {sigh} This is not fun.

At this point I don't know how long DD will be in the hospital. I'm counting on the physicians to be able to stop the contractions. It's too soon for those babies to be born! And I want to be there when they are!

I have made progress on the blocks for Sunflower's quilt: 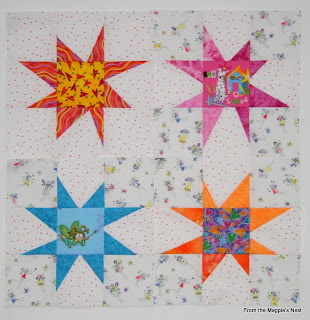 Had to go back to the stores for more of the fairies, and on this trip I found another print I thought would work as background. Little tiny roses that look like dots from a distance. You can see them in two of the corners of the block in the upper left of the picture below. 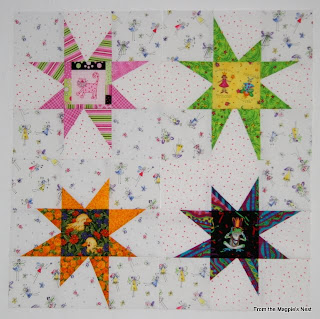 As you can see, I'm still mixing up the background patches. It remains to be seen whether that is a good idea or not.
No phone call yet. Guess I'll go snuggle under the quilt with Mr. Reilly and wait... 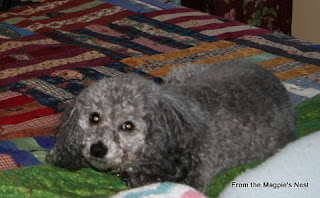 Thursday morning update: DD is home from the hospital with drugs in her system to help control the contractions. Apparently her muscles have simply been stretched as far as they will go and the contractions are what happens in that event. She has not officially been put on bed rest but I expect that may happen this afternoon when she sees her OB. Her MIL and FIL are coming up to live with her for the duration. That has obvious benefits but there are significant drawbacks as well. At least we know she's not in imminent danger of delivering those babies too early.
And now I'm off to see what troops I can rally to come to her aid...
Posted by Magpie Sue at 9:46 PM