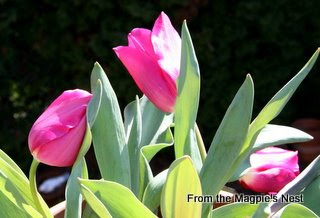 We are having a lovely spring morning here. The sky is blue, the birds are singing, the ranunculus have come up and are about to bloom in my flower bed. This is the kind of morning I'd like to bottle or preserve in some way. Maybe now that everyone in the neighborhood has gone back to work I can safely go outside and take a few pictures. Yesterday was lovely too, and everyone was out working in their yards, running combustion engines of one kind or another. Those are just some of the fumes that make me ill.

In fact, it dawned on me that when I lost a few days last week (not posting between Tuesday and Saturday) one of the reasons was that I went to an art show Wednesday. I knew it was a risky thing to do, in spite of all the precautions I take, and I was right. I didn't realize how badly I had been affected until later in the day. Of course by then it was too late. Oh well - all better now.

The other thing that apparently kept me from posting was work on this: 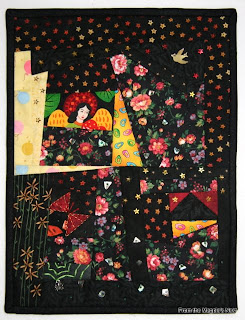 My second quilt for the Alzheimer's Art Quilt Initiative. I had just begun to embellish it the last time I showed it, here. It's a good thing these are small quilts (9" x 12" in this case) because once I had all the star sequins sewn in place I realized that they were overpowering the quilt. I really didn't want to do it but I went back and took most of them out, replacing them with a single seed bead. There are abalone chips thrown in there too to give visual balance to the embellishments. 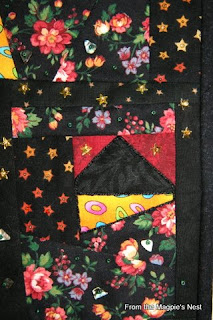 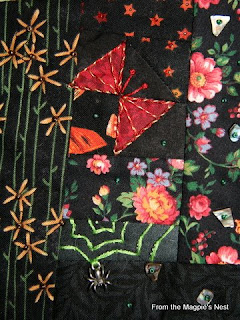 The spider web was already in the scrap of fabric; I simply enhanced it with a bit of embroidery. The Victorians considered spiders a symbol of good luck and I have adopted that for my own work. That pieced "butterfly" was another stumbling block. Everytime I thought I was done with it I'd step back, have a look, and decide it wasn't right. What you see here is probably the third version. I originally outlined it with a red perle cotton that blended in so much it made next to no difference. The first yellow I whipped the outline stitching with was too bright. Now I'm happy with it. Well, happy enough to call it done ;- )

While we're waiting for the registration number for "Guardian Angel" to come in I am thinking about what to do for Terry Pratchett's quilt. I have pulled a couple of fabrics that I might use... but you never know what will end up in the final quilt.
Posted by Magpie Sue at 9:28 AM