Let me warn you that this post is about my recent adventures with Multiple Chemical Sensitivity. 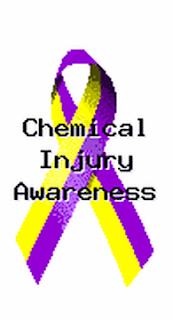 On the whole I try to keep a positive outlook in spite of my affliction. Every once in a while, though, one needs to let off some steam, let her guard down, be open and honest. Today is that day. It's sort of appropriate because my last post was my 300th, and MCS is one of the reasons I started blogging in the first place.

I went to the local discount department/grocery store yesterday to stock up on some essentials (Green & Black's dark - 85% - organic chocolate, sparkling water, organic beef broth, organic unsweetened soy milk, frozen organic blueberries... none of which is cheap!). I was in that store for only 10 minutes. I know because I looked at the clock on the dashboard of my car as I was getting out of the car and then looked at it again when I got back in. Not on purpose, mind you, I just did. I couldn't believe it had only been 10 minutes, but that's all it took to ruin my day and likely a lot of today as well. I suspect the store had just had its' floors buffed or polished. Having worked in such an environment back in the day I know this happens from time to time. The front of the store wasn't too bad because the doors open and let in "fresh" air from outside, but back in the back where the frozen foods are kept it was potent. At least for me. And then at the checkout stand there was another customer and her son nearby who smelled of laundry detergent. The overly fragrant kind. (In my personal opinion the makers of Gain are poisoning people with every box they make and sell. Tide is another culprit.)
I made a point of going to the store early in the day so I could avoid as many people - and their fragrances - as possible. What I ended up doing was destroying the rest of my day. From that point on I was a zombie. I put my Priority Quilt in the envelope for shipping (and now I have to find someone who can take it to the Post Office for me), and the rest of the day was spent mostly losing solitaire games on the computer. Oh, I did order four paperback books to read but they won't be here for another week at least. I wanted to order Gwen Marston and Freddy Moran's new book but I don't dare. There's no way I'll be able to read or even look at it without getting sick. Not unless I have someone take it all apart and put each page in a page protector. And then the whole lot will have to go into an old, already off-gassed, three-ring binder, probably 3" thick. {deep sigh} But at least I could look at the pretty pictures and read what they have to say. Oh well. I can, in fact, live without it. I'd just rather not have to.
My local quilt guild is having their annual spring retreat this week. The last couple of years I've made a point of driving over to poke my head in to see everyone again and see what they're making. I doubt I will go this year. Two exposure episodes in one week is enough (the art show and then yesterday's trip). In the past the building where they hold the retreat has been safe enough for me but I learned, the hard way, that there are hand lotions out there that are dangerous. Hand lotion! While I was visiting last year (the year before?) someone in my vicinity casually applied lotion to her hands. I had to leave immediately or I wouldn't have been able to get myself home at all.

So what, you ask, are the symptoms I experience after an exposure? The list is quite lengthy. And not every chemical creates the same reactions. Generally I know I've run into something toxic from the way my sinus cavities feel. That's the first alarm bell. Sometimes I can actually detect a fragrance or odor but that has become unreliable. My olfactory senses have been burned out in some cases and I can no longer smell certain smells. I may feel lightheaded or woozy. I may just have an overall feeling of nausea. I may notice that suddenly I can't keep a thought in my head or find the words I want. I turn into a stammering idiot (no offense to those who suffer from speech impediments) - or at least that's how it feels.

I confess to driving my car when it probably wasn't safe for me to do so. My judgement becomes impaired in subtle ways. Often it's not until I get home or run over a curb that I realize I probably shouldn't have been driving. However, it's usually the only way I can get home.

I have discovered that if I eat a custard cup of frozen organic blueberries as soon as possible after I've run into something toxic it mitigates the reaction. Not always, and not very much sometimes, but it does sometimes help. The headache that develops after exposure will not be as severe for example. Headaches are the big kahuna of reactions. For me anyway. They do not respond to aspirin, Tylenol, ibuprofen or any other over the counter analgesic. The only thing that removes a headache is something that puts me to sleep (and I don't think the headache actually goes away in those circumstances!). I have a very intense, dull headache this morning after yesterday's escapade. That's almost 24 hours after the event.

I also suffer from chills after an exposure to toxic fumes. Nothing I can do will warm me up. I get grouchy and short tempered. I'm restless but can't think well enough to sew or read or do anything. Or I can't stay awake at all and sleep for 12 hours straight. I engage in retail therpay online. I play countless games of solitaire. I overeat the few things I'm allowed to eat. It's just a spinning wheel of pain and discomfort everytime I try to go out and be a normal person, and then I come home and try to cope.

The tail end of the cycle is depression. At least I've learned to recognize that that's what it is. When I start to feel depressed I know it's almost over. And I remind myself that the thoughts going through my head are not true, not real. They are the result of the toxins I was exposed to 12 or 24 or 36 hours ago. It still amazes me that mere fumes can make a person react on an emotional, sub-conscious level. That is perhaps the most frightening reason to demand that manufacturers remove toxic chemicals from the products most people use every day. Never mind that there are known carcinogens in those products as well and that people are dying from more kinds of cancer than ever before. Honest to Pete, people, prevention is the cure. For everything.