Last week I played with the food blocks and came up with an arrangement I liked. It was more than I could do to get a decent picture of the layout though so you'll have to wait to see how it's coming together. In the end I decided to sash the blocks, and there were about 5 blocks that did not make it into the quilt top. They will go into the orphan block box for future use.

The next step was to buy yardage to make the sashing. I found a print I really liked at the first shop I went to but it cost more than I was willing to spend. All the others were too busy or the wrong color or had a definite stripe to them, which I didn't want to have to cope with in terms of keeping it all going the same direction over the surface of the quilt.

Finally, because I was out of options and rapidly losing mental function, I bought a yard and a half of a texture print that is the perfect blend of colors without being too light or too dark. Unfortunately it has a distinct direction to it, running parallel to the selvage edges. I washed and pressed it and then turned my attention to other things to let my subconscious dwell on the issue of whether to worry about how that print was going to look as sashing.

In order to cut that yardage into strips for sashing I knew I would have to clear off my cutting surface. I do not have a 'before' picture for you. Suffice to say that I had scraps of varying sizes left over from my Fungly Quilt stacked with leftovers from more recent projects, all piled around my little 24" x 36" mat. Those scraps had been on my mind for some time. It was either cut them up into usable bits or put them away somewhere, somehow. I really didn't want to have to find another place to store something so I decided the time had come to cut them up.

I made a plan. I decided to make six inch Bow Tie blocks and Churn Dash blocks. That would allow me to cut pieces as big as 3.5" square all the way down to 1.5" strips. 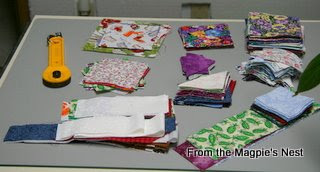 I had enough of a few fabrics to cut 3.5" squares for backgrounds for Wonky Stars too. There were even a couple of novelty prints I managed to get 4.5" squares out of for future 12" blocks. What you see above is what I had done by day's end Saturday.

Last evening I allowed myself the pleasure of pairing up squares for the Bow Tie blocks. They are now ready to be used as leaders and enders (a la Bonnie Hunter, here). I think there will be 24 blocks made from the stack of patches you see on the left in the upper part of this picture: 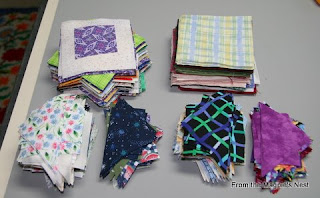 I have not yet paired up the prints for the Churn Dash blocks, although I have separated out the prints I want to keep for myself and those I'm willing to part with. I suspect there might be another 24 blocks in those patches! 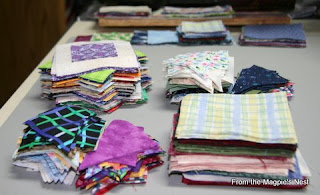 I have background squares for maybe 12 Wonky Stars (9"). They are not going to get made very soon, I don't think. At least not until after I get this Foodie Quilt top together. I intend to cut up more of my older fabrics into squares for Wonky Stars, so maybe when that happens I can begin to think about what the stars themselves might be made from. Today I need to bag up these patches (to keep them together and safely out of the way) and get on with cutting those sashing strips...