Throughout the year members of my local quilt guild make quilts for babies in the neonatal intensive care units of our local hospitals. These preemie quilts are a minimum of 18" wide and 24" long to comfortably fit on top of the isolettes. You can imagine how they brighten up a sterile environment! Each quilt becomes a gift to the baby's parents. Sometimes when the infant does not survive it is the only tangible evidence of their baby that the parents have to take home with them. 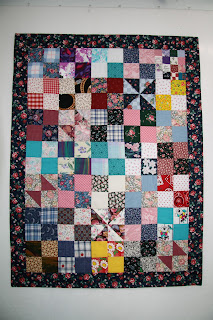 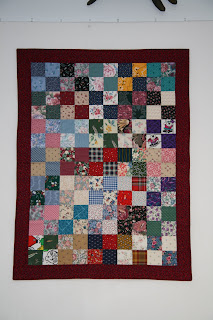 were made from orphan blocks I'd made in my early quilting career. Back then I would cut 2.5" squares from my fabrics as I used them in other projects. Eventually they were sewn into four patch units (on days when I needed to do some mindless sewing!) and then apparently abandoned while I went on to other things. As I am learning how to cope with my new health situation I have had time to go back through my old projects and bags of blocks. I'm having to make some difficult decisions about what to keep and what to pass on to someone else (or put in the trash). Some of those fabrics I bought in the early years are now hazardous to my health! Even though everything in my stash has been prewashed, some of those cheap fabrics have a sizing or something in them that off-gasses when hit with a hot iron. So out they go, no matter how much I like the color or the print! (In the early years I had three toddlers and no money so the $1.00 a yard cottons at Wal-Mart seemed like a good deal. Live and learn!)

Anyway, I was able to piece almost two preemie tops from just those four-patch units I made so many years ago. The pictures are actually in reverse order. I made the first one you see second and the second one you see first. I needed 6 more blocks to complete that second top (the one at the top of the page) so I dug around in my orphan block collection and found the pinwheels and the 16-patch block and the hourglass blocks and sewed them in randomly, only making sure I didn't have two of these "oddball" blocks in any one row. I think it's much more interesting than the one that is all four-patch blocks.

Below is the quilt that I referred to in my previous post. And as I said before, this one is my favorite of this batch. I made it from scratch, as it were, not from leftover blocks. Although it is almost completely created out of scraps. Nearly all of the strips were leftovers from projects of mine or friends of mine. When I got to the outer edges I had to break down and cut strips from yardage to get the lengths I needed in the colors I needed. (There are more strips and scraps of duller colors waiting to be dealt with someday.)

I piece my tops, back 'em with flannel, and do minimal quilting to hold the two layers together. All of these have been "stitched in the ditch" 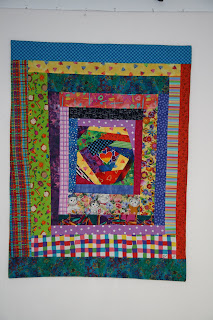 in a rectangle in the center of the quilt. Rather than bind them I finish them pillow style and then top stitch around the perimeter of the quilt, sometimes using a decorative stitch on my sewing machine.

Sometimes I fret that I don't make "pretty" or "cute" quilts for these babies. I just don't do pretty or cute! It's unnatural for me! Hopefully there are families that come in who appreciate these funky creations of mine. Even better, maybe the strong colors and busy prints provide energy and stimulation for the little souls trying so hard to survive. I sure hope so.
Posted by Magpie Sue at 2:30 PM