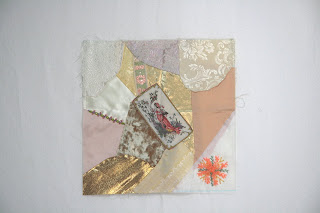 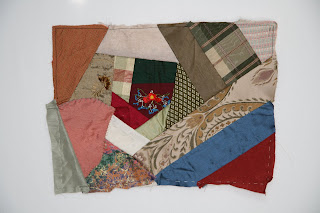 I am a member of the CQ Embellishers Yahoo group. A subset of that group is doing a round robin project wherein we are to bead embellish crazy patched blocks for each other. There are two groups with about 6 people in each. I have just received these two blocks to work on. The block on the top has already been embellished by Joann; it belongs to Vivian. I will also do some beading on it and then I will send it on to Ellen. She will bead it some more and send it on to the next person. Eventually the block will make its' way back to Vivian at the end of the Round Robin. The block on the bottom is Joann's block. I will be the first one to embellish it. As you can see, we were allowed to make our blocks whatever size suited us and in whatever colors or theme we desired. It will be great fun to get these "mystery" projects in the mail and exercise my creative abilities on them! I already have something in mind for one of the patches on Joann's block :- ) I'm disciplining myself to work on hers first because if it weren't for her husband falling ill I would have received it first. I'm going to try not to be intimidated by the work that Joann did on Vivian's block! In fact, I'm going to try not to even look at Vivian's block again until Joann's is in the mail on its' way to Ellen ;- )