I've had my complete set of FootSquareFreestyle blocks for months now. At first I was busy on other quilt projects so didn't have time or energy to play with them. Then poor health took over for a while. I've felt more like myself again recently (whew! thank goodness!). I was laying in bed the other night, waiting for sleep to come, when suddenly an idea for setting those blocks popped into my head.

I completely dropped the ball in terms of keeping my own blog updated with the pictures of the various blocks everyone was making for this international block swap. Fortunately the originator of this swap, Kate from the wonderful land of Chiconia, has been far more diligent than I. She has a whole gallery page over on her blog where you can see not only the blocks I received but all the other blocks that have been made and sent so far too. (Poor Kate is the last one to receive her blocks. She has to wait until next month for hers!)

Suffice to say that my request was one bright, intense hue with black and white. It was an innocent enough request, or so I thought. I found I just couldn't bring myself to set the blocks together side by side or even with sashing. So they sat, waiting patiently for that eureka moment. But would that idea work?

There are 36 blocks in the set. I want a quilt big enough for my double bed. I've learned over the years that a square quilt works really well on that bed. It doesn't provide equal drop on all three sides but since I have a foot board that doesn't matter. I also like being able to turn the quilt one quarter turn periodically to even out the wear or fading that might occur.

I hadn't really assessed the color distribution among the 33 blocks I was sent. That night I couldn't even remember what the blocks I'd made for myself looked like! I wondered whether I would be able to group the blocks by their featured color. And if so, would I be able to make groups of four blocks? If so, I could create what would amount to a giant nine patch format. Nine sets of four blocks equals 36 blocks, the total number this swap was to produce. (I'd received an extra block from one participant, and I could easily make any blocks I might lack for the desired result.)

So the next morning I got out the blocks and started sorting... 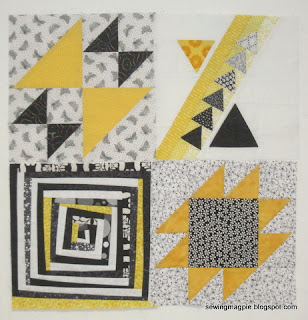 Eight green blocks, which I divided into two groups: 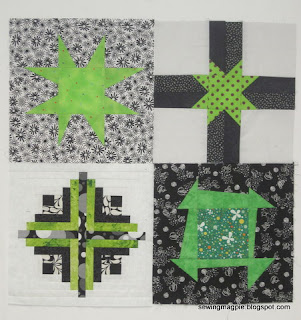 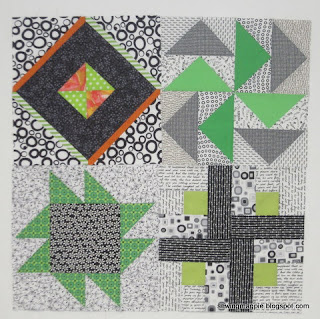 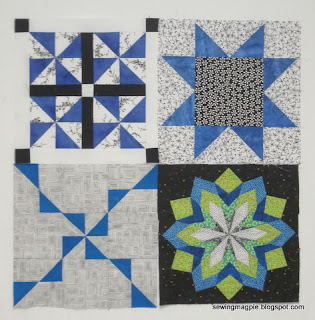 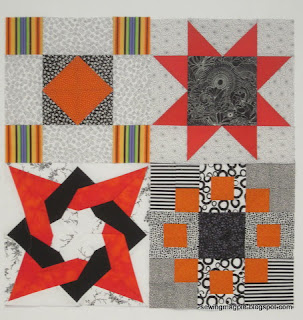 There are 12 blocks in various shades of pink, and some that feature a rainbow of color. To keep this post from getting ridiculously long I'll show you in another post what I end up doing with those.