Bee, Myself, and A Bluebird

Once again the last several days have been physically difficult for me. It's such a tiresome cycle. I've made a couple more ships; I'll show them to you another time. When I've been more than a vegetable I've been doing more needlepoint. That's what I do for selfish sewing. As I was approaching the end of the flamingo card case I knew I would need something new to work on. I found a vendor on Etsy who had some small needlepoint kits for sale. I bought three. Two are of birds, the third is a floral arrangement. I chose to begin with this bluebird canvas. 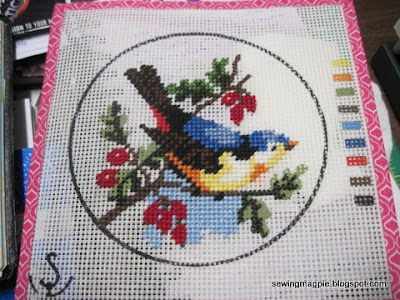 I made subtle changes in the color palette. The most dramatic change is in the background. White was included for that purpose. I just couldn't go there. I'm thinking I will square off this composition and have my friend C~ use this as the front panel of a sewing tote or maybe a small bag for one of my granddaughters. White wouldn't last long in that application! I debated over pale green, yellow, or blue. I'm hoping the pale blue I chose will contrast enough with the blue of the bird's head to be effective. 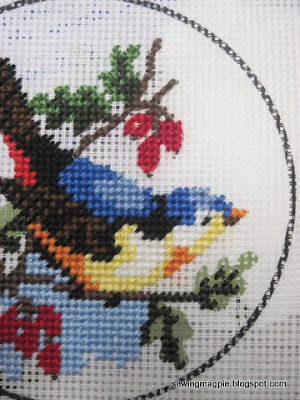 See what other selfish sewing is happening around the world over at Granny Maud's Girl!