I tried to load pictures from Flickr. The prompt said my pictures had loaded but nothing showed up, twice. Then I made my picture files smaller. For whatever reason that seemed to do the trick although it still took forever for the photos to load.

Here's the finished version of the quilt that went to New York for the BASICS program. 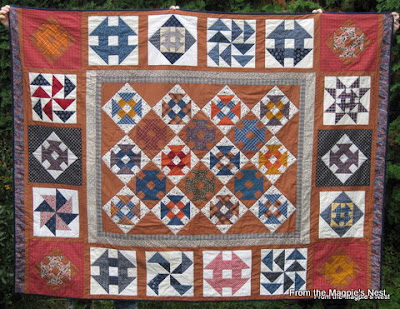 I don't know whether you'll be able to see it bigger or not. I did very simple quilting so there's not much to see in that department anyway.

And here's the ATC I made up for October. 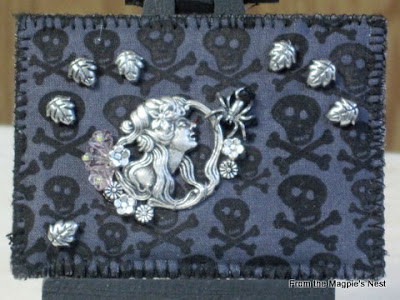 I haven't figured out what to call it yet. I just got a kick out of the juxtaposition of the whimsical skull and crossbones print and the elegant Art Nouveau lady and the spider. The beads are all pewter except for three glass trumpet flowers that are a faint pink with yellow stop beads. I had difficulties machine stitching around the edge this time. Between the fat presser foot I have to use for the blanket stitch and where I put those leaf beads there just wasn't enough room!