During the silence on this blog I have at least been at work in the studio. I don't know whether I mentioned it or not but I have been sewing 1.5 inch strips and pieces into 12.5" strips. (I have a picture of my lovely flat box with the strips all neatly arranged inside but I'm being restricted to one photo per post apparently.) When I realized it would take 12 of those strips to make a twelve inch block my enthusiasm dropped significantly. Then one day it occurred to me that I had a stack of liberated log cabins in my drawer of orphan blocks and that maybe I could use them with these pieced strips. Or rather, use the pieced strips to build the log cabin blocks up to a bigger size. (Insert another picture here, of a liberated log cabin block with a single row of pieced logs sewn around it.)

Also during this time Laura was so kind as to send me a duplicate copy of Gwen Marston's book Liberated Strings that she discovered in her studio. There was a picture in there of an antique four block quilt that got me to thinking about making a four block liberated log cabin quilt top. I also had in mind the request for 40 x 45" quilts for the Alzheimer's Disease Co-operative Study. Suddenly I had a fully fleshed out project. :- )

Here's the one photo I was able to load, my four blocks at about fourteen inches: 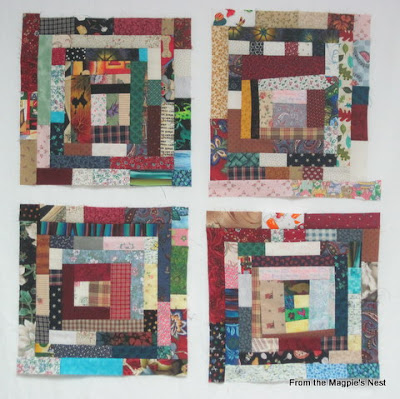 As I'm writing this I have the top nearly done. I guess we'll have to wait for the next post for you to see it. Maybe after Election Day the Internet will be less busy? I may just have to develop the habit of shorter, more frequent posts. Or maybe things will settle down again once Blogger gets all the kinks worked out of all the new stuff they're trying to pull off. Seriously, when did the world get so hooked on new and improved? Can I blame Steve Jobs or will I be lynched for making such a blasphemous statement?
Posted by Magpie Sue at 8:35 AM