Unless I'm mistaken, this is how far I'd progressed with what I'm calling my Puzzle Quilt at the end of the last post. 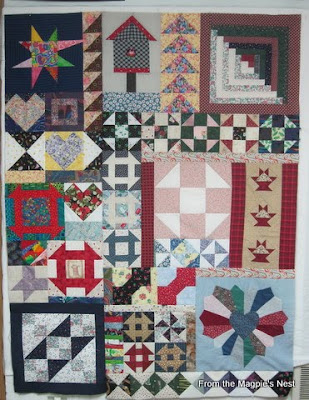 That row of Hourglass blocks across the bottom (they look like square in a square blocks because of the way I've set them) is mostly sewn into place. If you look closely, however, you'll see that the bottom edge of the Contrary Wife block is shorter than the Hourglass strip. It did not occur to me to just add a strip to the bottom of Contrary Wife. Instead I took out one of the strips in that compensating strip of strips between Contrary Wife and the small Churn Dash blocks. It was definitely the more time consuming way to fix the problem but there you go.

At this point I decided I wanted to make the quilt wider. Back to my box of orphan blocks. I found another birdhouse, I believe made by the same person who made the first one. It was about 11.5" square so I planned the column of blocks to finish at 12" wide. As it turned out, this was the place for that light red plaid 10" Churn Dash block. I used a few of my odd 6" blocks and made up a few more to fill in gaps. 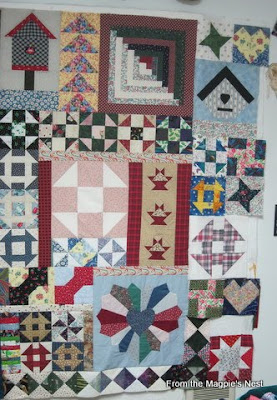 You'll see some more of the Hourglass blocks too, making their way around the star in the lower right hand corner. I was thrilled to discover that I could make them turn a corner and keep the colors and values where I wanted them to be. The light in the right-most Hourglass is a green and the dark in the block above it is also a green. In person they blend together a little better. So here's the top, 60 inches square-ish. Now it needed to be longer. 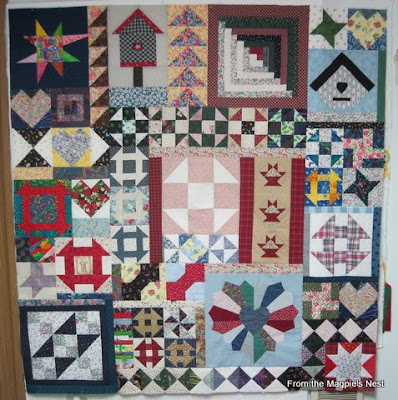 I could either add a row to the top or the bottom. I didn't like any of the bigger blocks I had left at the bottom. Plus I kind of liked the Hourglass strip acting as a sort of border for the bottom edge. So I framed up a 12" Shoo Fly someone else had made to make it finish at 15" and used that height as my goal for a row across the top. That blue Spinner block finally found a home, along with a few of my Bow Tie blocks. In this row the only block I had to make on the spot was the Shoo Fly with the red background (9"). 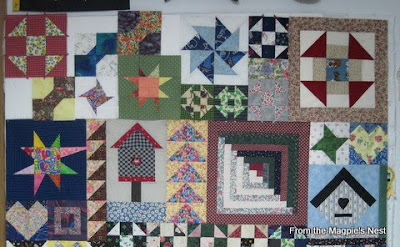 I think I can show you the final product in the next post. Once I filled in the gaps in that top row it was only a matter of adding borders to bring the whole thing up to size. I'll tell you right now that I couldn't be more pleased with the way this quilt turned out. It was surely meant to be. :- )
Posted by Magpie Sue at 11:51 AM