Another One Bites the Dust

In a manner of speaking. Margaret's Hope Chest is celebrating four years of making and donating quilts. They just sent ten quilts to Japan. Now they're trying to refill their coffers by asking folks to send in their unfinished quilt tops, any size, as long as they are clean and usable. I really didn't think I had anything but I looked anyway. Lo and behold, look what I found! 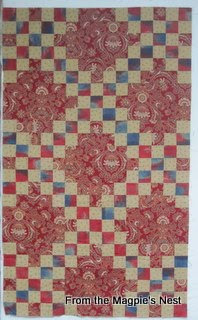 It's the beginnings of a Double Irish Chain from back in my teaching days. It only measured about 30 x 50 inches though, and there was plenty of fabric in the bag so I did some cutting and sewing and turned it into this: 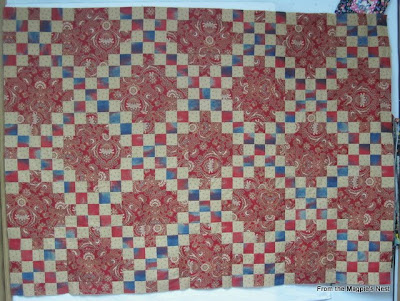 A 50 x 70 inch top. I know I had borders planned for it. There may even be something around here I could use for a back. But you know what? It's gone. Outta here. The reason that top was only three blocks by 5 blocks when I found it was because I did not enjoy the process involved in making the blocks. It's one of those where you cut strips, sew them together, then cut sub-units and sew them together. I kept getting lost! It's much easier for me to cut the stupid little squares, place them on the table next to the sewing machine, and sew them together one by one.
sheesh
The top is now on its way to Margaret's Hope Chest. I hope some lovely quilter will turn it into the stunning quilt it could have been. Part of me feels bad for not finishing it myself but there was way too much negative energy involved. I need to go sew some scraps!
Posted by Magpie Sue at 12:03 PM