So, before I could do anything more with the doll I started (see previous post) I got a call from my Darling Daughter. She sounded awful. Her voice was a whisper and she sounded extremely tired. Second Son and I drove over to her house to tend the children while she went to the doctor. When we arrived we found Sunflower in the living room, at the brand new couch, with an open carton of raw eggs. One egg had already been broken into the carpet. Another had obviously leaked in the carton. The rest were on the seat cushion. There was what looked to be at least half a box of cereal strewn all over the carpet as well. DD was sound asleep in her bed, one infant on either side of her. Son started cleaning up the mess and I let DD know we had arrived.

Several hours later DD came home with the news that she had been diagnosed as being dehydrated and had strep throat. They pumped three bags of fluids into her and gave her a prescription. Son stayed with her overnight, and the next day she was able to take her children to a friend's house to spend a few days. There are three adults in that home so there were plenty of hands and eyes to take over for her and let her get the rest she needed. Whew!

Since Saturday she has perked up immensely. The older two granddaughters are now being treated for strep as well, and the babies are being closely monitored. I have been a slug for the last few days however, no doubt trying to fight off an infection of my own. Fortunately I had finished my "Celebrate" ornament before I even began the doll so I can share that with you today. Here's the lower half of the ornament: 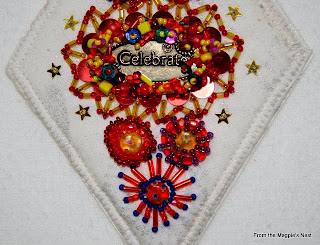 And the upper half: 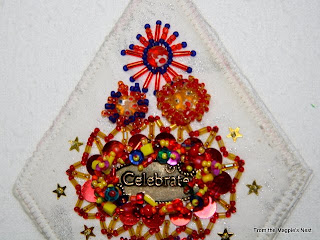 And the whole thing: 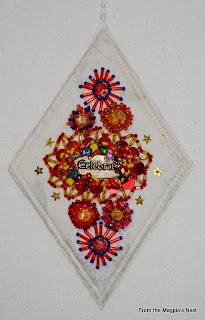 I have tried to upload these pictures so you can click on them and get a good look at the beading. This ornament turned out to be something of a technique sampler, which is fine by me. It was fun to do and puts me in mind of fireworks. Completely appropriate for a celebration!