What Do You Think?

I've mentioned that I'm making a birthday quilt for a little girl who will be turning four at the end of May. She requested kitties and/or puppies in her quilt. I didn't think this would be a problem... until I actually started making blocks. Which is what I've been doing since my last post.

First I debated about what blocks or what process to use. Somehow a liberated quilt didn't feel right so that got eliminated right away. I also didn't particularly feel like making a bunch of precision pieced blocks. I looked at a lot of Disappearing Nine Patch quilts online. For a while I thought that would be the pattern/process I would use. But I was also thinking about Karla Alexander's Stack the Deck process for making crazy blocks. In the end that's the one I went with. 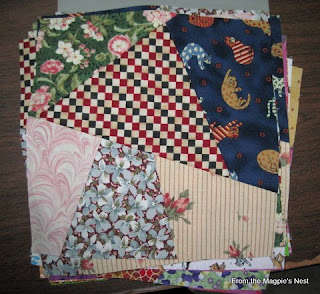 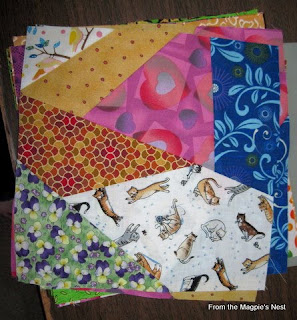 I think the problem began with the fact that some of my cat prints are dark and grayed while others are bright, pure colors. I thought I could manage to blend the two, using the "more is better" principle. I'm just not sure it worked in this case. 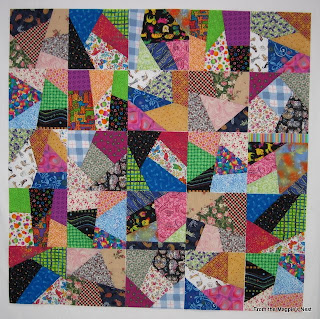 This is not all of the blocks, but enough to give you a rough idea what I've got. I ended up not using many of my cat prints for one reason or another so to begin with I don't feel there's enough catly presence in the top currently. I guess the other thing that's bothering me is that this feels too old for a four year old. There are some fun and colorful prints in the blocks but it just reads darker than I think a preschooler's quilt should. What do you think?
To be fair, I should tell you that I have ordered a large print with cats in it that I thought I might be able to work into the top somehow. It could become borders or a feature element. I won't know how well it even works with these blocks until it arrives. It has a black background however so it won't do anything to lighten up the quilt top. It didn't appear to be available in any other colorway.
What I really need to do is turn my attention away from this puzzle and occupy myself with some other project until the new fabric arrives. Soooo... what to do for my March Bead Journal Project?