I spent yesterday making about a dozen log cabin style blocks out of my flannel scraps. 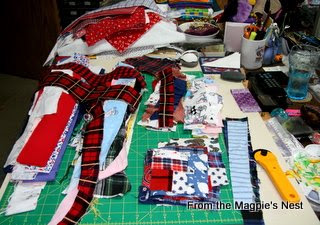 At the moment I'm shooting for 8.5" blocks (raw). Beyond that I have no specific plans.

I also added another row of borders to the flannel preemie top. 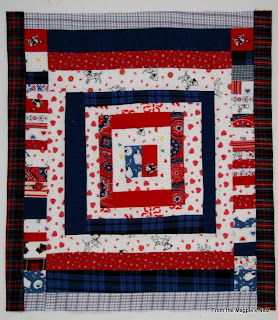 It just felt unfinished to me. I'm happier with it now. It will be a little bit bigger than the preemie quilts I usually make but that's okay. I will finish this up with a flannel back and a bit of quilting (by machine) and it will be my contribution to the Virtual Quilting Bee for Charity sponsored by Michele over at With Heart and Hands.
Michele is also co-ordinating a meeting of bloggers at the Sisters Outdoor Quilt Show this Saturday. She's asking those who come and want to be identified to sport a red bandanna on their person somehow. As much as I would love to be there and meet some of my new cyber friends it's just not possible. In the spirit of participation, however, I have tied a red bandanna on the tote bag I would be carrying if I could be there: 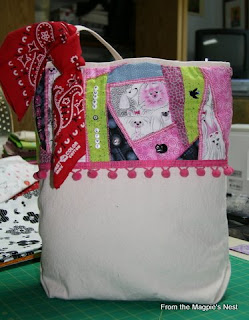 And I will have a block in the display of challenge blocks. You can read the details of the challenge here. This is the block I made: 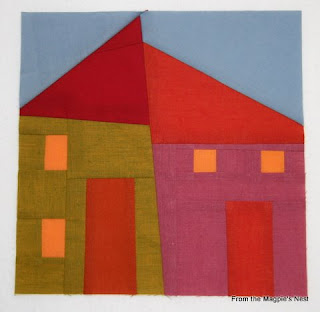 Keeping in mind that Gwen & Freddy would be at the show I wanted to make a block in their honor. Liberated houses seemed just the thing. I was trying for a pair of houses leaning against each other, supporting each other the way friends do.
That palette was a particular challenge for me to work with, let me tell you! There were three pieces in the packet that looked to be exactly the same color. Two of them were, and the third was only slightly different. We were allowed to add one or two solids of our choice. I added a red (the roof on "Freddy's house") and the blue for the sky. I was sorely tempted to embellish the block, or at least embroider a bit to dress it up, but I refrained. I figure whoever ends up with the block can decide whether it needs embellishment or not. I appreciate and enjoy the look of quilts made with only solid colors but I'm a more-is-better kind of gal!
;- )
Posted by Magpie Sue at 10:11 AM