Bee, Myself & I in April

Bee, Myself & I was created by Carla over at Granny Maud's Girl as a way get in some sewing purely for her own pleasure, not out of a commitment of any kind. I'm finding it helpful to give structure to my calendar of projects.

This month I've used BM&I to get a top built out of blocks I've been making over the course of four years. Not that the blocks were all that difficult to make. On the contrary. They're probably my favorite block, and they're not hard at all. The traditional Churn Dash. 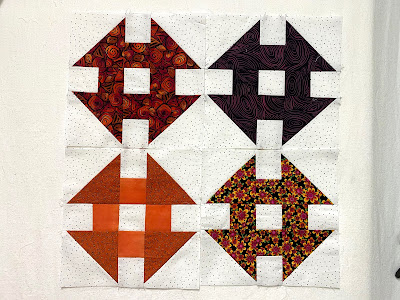 These happen to finish at 10." Usually I make a variation out of scraps that finishes at 6" and is called Hole in the Barn Door because the center square is larger and the side squares become rectangles. Another name for this version is Monkey Wrench. If you use your imagination you can see the head of one or more wrenches in the design.

Back when I started making these blocks it was to preserve in a quilt for myself some prints I was especially fond of that were in danger of being used up. Another goal I had was to float the blocks on a single background print. At the time I didn't have a clue what the end product would look like or how big it would be. I've had a name for it all along though: Final Wrenches.

When it occurred to me that I probably had enough - or more than enough - blocks for a personal quilt I got the box out of the Parts Department and counted them up. Sure enough, there were more than I needed for a 60" x 80" quilt top. But there were also those that didn't play well with the others when I tried arranging them on the design wall or featured prints I was no longer so in love with.

In some of my recent quilts I was able to create a rainbow effect with block placement or to graduate the colors across the surface of the quilt. I tried to do that with this one at the outset. It didn't work. This is a true scrap quilt in that the colors and prints cross a whole spectrum of values and styles. This is the arrangement I ended up with: 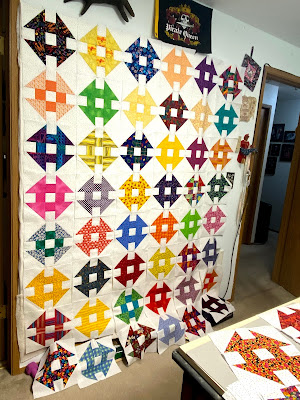 And now I know why so many of the old (and not so old) Churn Dash/Monkey Wrench quilts had whole cloth alternate squares or sashing. Sewing these blocks to each other was no picnic. Matching points doesn't normally bother me but some of the background patches must not have been cut precisely or something. Then there's the bulk created when two sets of half-square triangles come together. I lost track of how often I had to rip out part of a seam and try again. Halfway through I had to take a break. I also lowered my standards along the way. 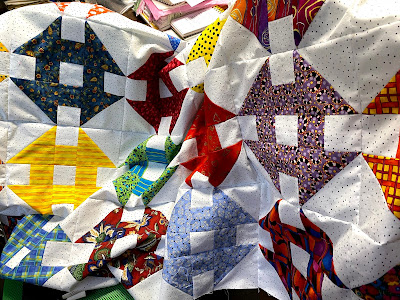 Pressing seems to have been a big help. The points are matching better than I expected. I'm sure close inspection would reveal inconsistencies but at this point I don't care. 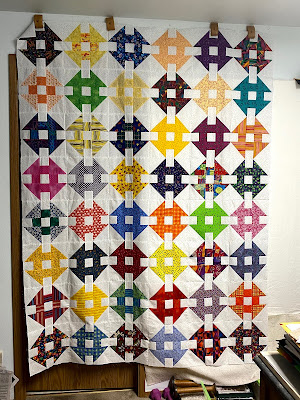 By the time this gets quilted I'm sure I'll be happier with it than I am at the moment. 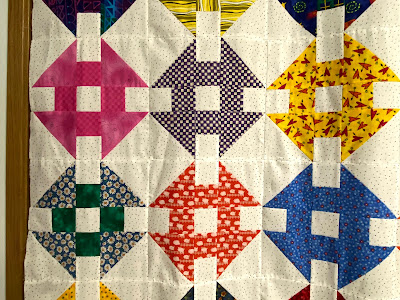 And now I get to figure out what to do with those leftover blocks! Who knows, I might even figure out a way to include them on the back. 😊