There's a new arrival on the horizon in our clan. To that end I've been pondering baby quilt options. At one time I purchased somewhere between a half and a yard of this delightful print: 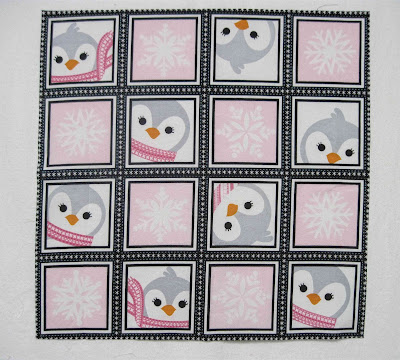 Since the baby is due at the end of January I thought this might be more appropriate than the more summery print I was considering. The trouble with both prints is that their framed images do not fussy cut to easy-to-use sizes. Eventually I discovered that I could isolate a 15" square of this print without compromising the penguins. Some while after that it dawned on me that I could make 6" blocks, separate them with 3" sashes, and come up with alternate 15" units. There's nothing like a good plan to get things moving. :- )

After I cut the 15.5" squares from the yardage I realized I could also cut 3.5" patches featuring the penguins and snowflakes. I'd have preferred to have included more of the borders around the images but I could make 3.5" patches work. In fact, they led me to the solution for the 6" blocks. 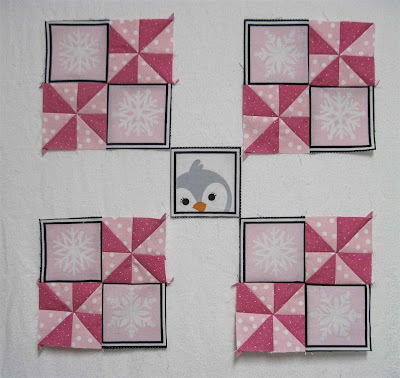 Except that there weren't quite enough snowflake panels to go the distance. Fortunately it didn't take long to come up with a solution for that little dilemma. 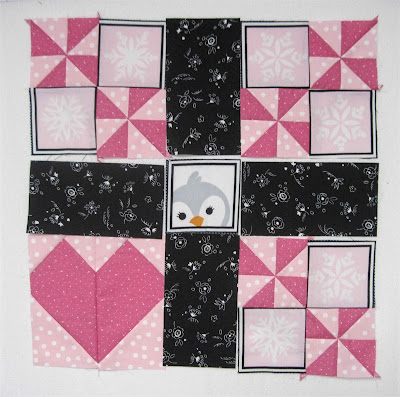 So now I have a top that looks like this: 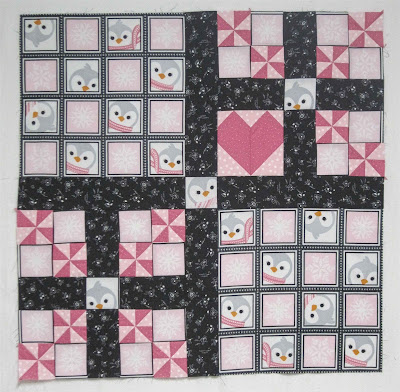 I'd really like to add an outer border but don't have enough of that black print to do the job. I do, however, have some penguins left over that I could use for cornerstones in the border.

We'll see if I can find a suitable border print in the coming week.

While I was working on this project I came across a long-forgotten pink remnant. I cut it up to create a 10" Wrench and another Turkey Tracks block. Over the course of the week I also managed to get a a few other blocks made out of pink scraps so I'm linking this post with the Rainbow Scrap Challenge. :- ) 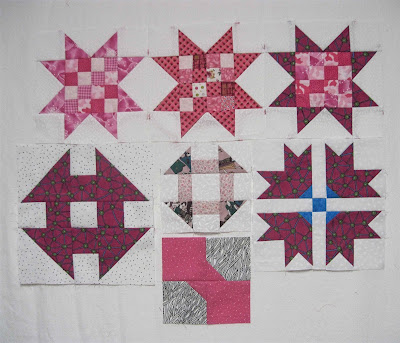