The day we've all been waiting for is finally here! I'm excited to see how everyone else's liberated medallion quilt tops turned out. In the meantime here's my story. (Do you have a fresh cuppa? You might want to go make one before you settle in.)

You may recall that I made liberated log cabin blocks in the first round when we were to be inspired by any aspect of childhood. (You can read about that here if you missed it.) That meant I had a real challenge when the next prompt came and it turned out to be log cabins. Rather than making more blocks I treated the whole medallion as a giant log cabin and only added some framing strips, Courthouse Steps style. 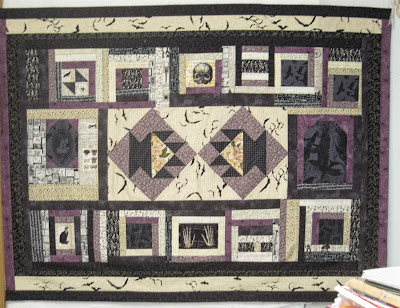 The next design prompt was stars. Seemed easy enough but I got stuck at that point. I had a few ideas, but without knowing what the final prompt would be I was afraid to make a move. That turned out to be a difficult month for me physically too. I fussy cut more images from one of the prints in my palette and randomly made a couple of stars but didn't build a single border. 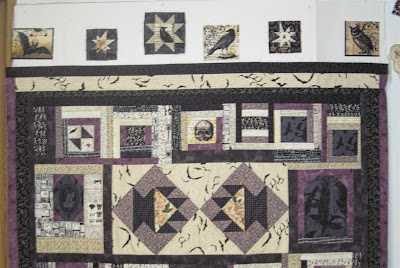 The final prompt was completely unexpected: add something fishy. Given the nature of my medallion thus far I was driven to find some fish skeletons. And I did! In the right colors and scale to boot! But how to incorporate them in a way that made sense? How would fish skeletons come into the picture? Because cats had eaten the fish of course! 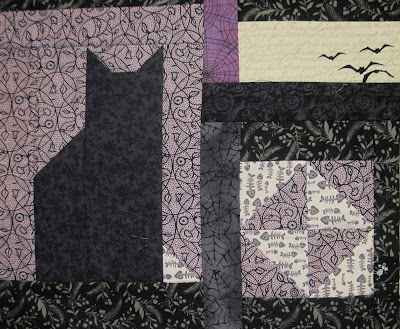 Cats are also fond of mice. The lower half of the quilt became a garden in my mind, the source of the roses in the baskets that started this whole adventure. 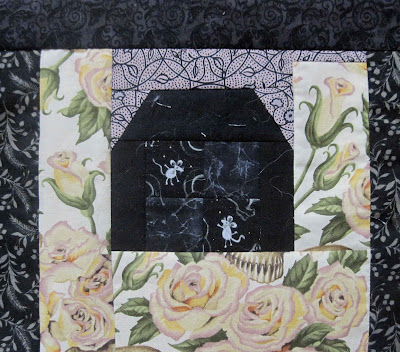 Along with the ubiquitous spiders of course. ;- ) 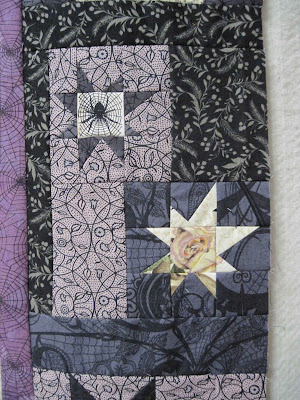 I kept the creatures of the air in the upper half of the borders, with the exception of a few skeletons dancing in the star light. 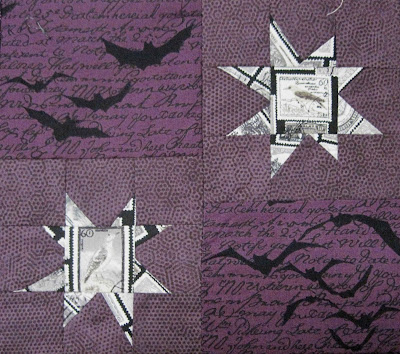 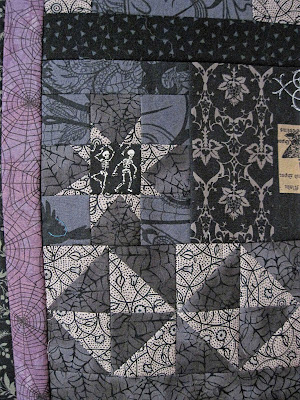 And now, the whole quilt top: 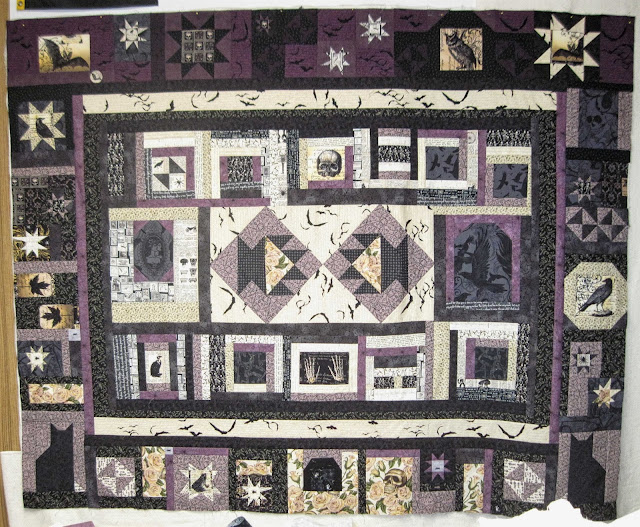 I do have one more design decision to make. I'm debating whether to add final border strips, partly to bring the quilt closer to the size I was shooting for (although it's perfectly acceptable the way it is) and partly to frame the composition. 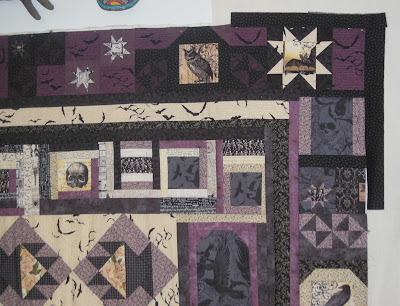 On the other hand, I don't want it to look like it's waiting for another border. These whole-cloth strips will mimic the strips in the Courthouse Steps round and I wonder if that will be redundant. I'm planning to bind the whole thing - eventually - in black. This shot isn't much to go on but I don't have much room to audition any further either. I'll only be adding 4" overall to the width and somewhere between 2" to 4" to the height if I go with the black border strips. I'll take all suggestions into consideration, thank you very much.

Now, if you haven't already, I highly recommend you to pop over to the link party on Lori's blog so you can see the whole gamut of liberated medallion quilts that have been created during this quilt along! This has been a really fun trip and I'm grateful to all the hostesses for making it so. :- )