First Steps in Making a Journal

I signed up for Carole Brungar's journal making class after I saw the journal QuiltDivaJulie made during her time in the class. While I was waiting for the right watercolor paper to arrive I brewed up some teas and tried them out on sample paper to see what colors I would get from them. 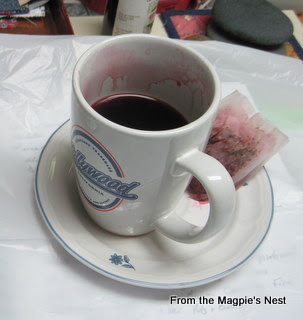 This happens to be the blueberry tea. I also brewed rose hip, peach, and China mountain green. Oddly enough, the China green tea produced a very yellow hue. I had a blast brushing and spattering it onto the paper. 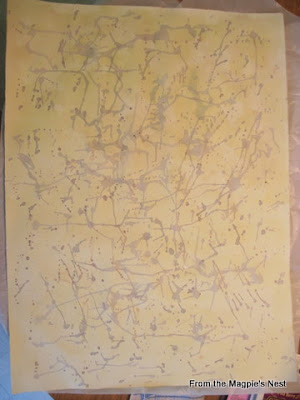 It's more yellow in person than in the photo. Below is the other side of the paper dyed almost exclusively with the blueberry tea. It's sort of a brown-gray in person, partly because I used a layer of the rose hip tea in some areas. 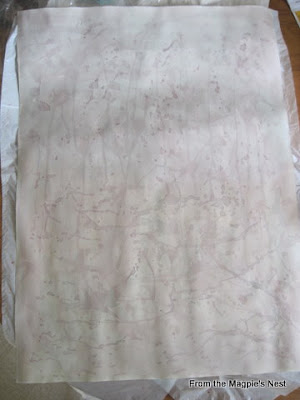 I also soaked this bit of ribbon in the blueberry tea. It was stark white before its bath. 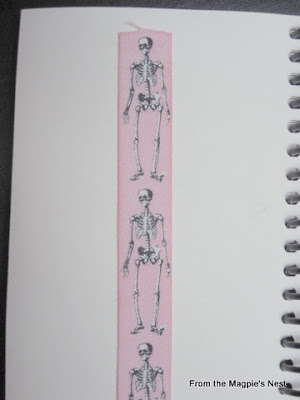 I've torn the big sheet of watercolor paper into strips for pages and have begun to embellish the pages. Turns out that making a journal is not like making a quilt, at least for me. I tend to start a quilt and keep working on it until I reach a solid stopping point. With this journal I've been doing a little bit at a time and then I have to leave it until the next day or so. Granted, I only have a vague idea of what I want to accomplish with it and the whole thing is a new experience for me. All the bits and pieces under consideration are taking up valuable real estate in the studio however. I've got to figure out a way to get more done or get more sewing in or something. There's altogether too much chocolate being consumed out of frustration!
Posted by Magpie Sue at 7:39 PM