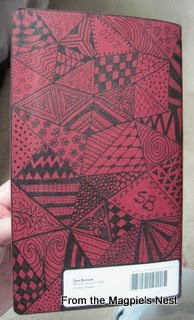 With that done and gone it was time to turn my attention to another project. I'm not quite ready to tackle the next step of my Intuition quilt so I thought I'd have a go at another block built intuitively to send to Janet for our intuition swap. I had a short stack of bright scrappy blocks I'd made a few months ago. This seemed like a good time to bring them out and see what I could do with them. None of them were anywhere near 12" yet. I sewed a few together and came up with this: 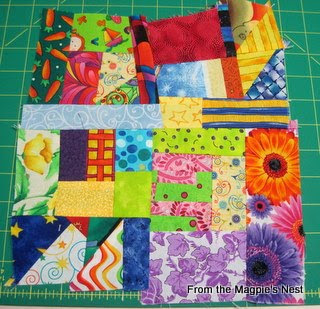 Still not 12" but a lot closer! None of the other units seemed to work well together so I figured it was time to start some new pieces. I got into the itty-bitty scraps bin and sewed odd triangles together. 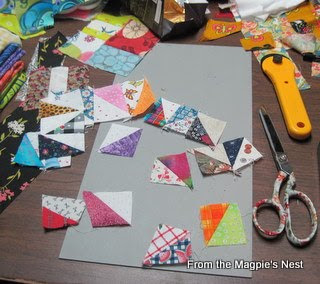 What surprised me was that this began to feel like a chore to me. Now I realize that I was probably thinking too hard about what to put where. But what I did was switch projects instead.

In my stash there was also a bunch of neutral scraps that I had sewn together at some point in time. I got those out to see what would happen with them. Mostly I only had two or three pieces sewn together when I began, like what you see at the top of the picture below. 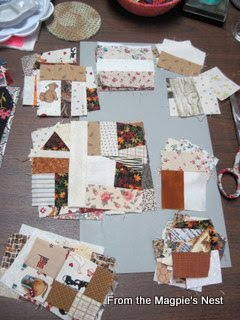 I started combining the small units into bigger units. I also let myself sew some into long strips: 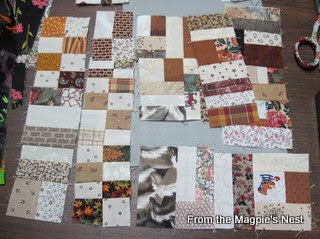 I have no idea at this point what this may turn into. I may put it all away again and do some beading instead. I don't want to send neutrals to Janet because I know she likes bright colors.
I'm feeling unsettled, dissatisfied. I suspect I may still be recovering from a toxic exposure. It's very challenging when you don't even realize you've been exposed - often I can't detect the fumes that are going to make me ill - and then suddenly you realize that you're experiencing symptoms of exposure. At least now I know to go back and track my actions. There is some comfort in discovering that there probably was a toxic event that would account for the downturn in my well being. I just wish I could find the trick for making it go away faster!
Posted by Magpie Sue at 12:13 PM