I'm so glad to be feeling better again. Too bad I've got to go out this afternoon to get food and things. There's always the chance I'll come back poisoned.

We had visitors over the weekend: 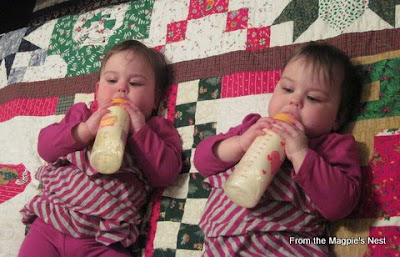 It's hard to believe they're going to be one year old pretty soon. (Yes, the Christmas quilt is still out. At least the tree and all the other decorations have been put away!)

My friend C~ stopped by briefly the other day too. Look what she knitted for me! 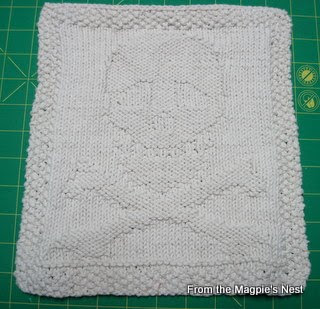 I love it. I just have to figure out what to do with it! Even DH says we can't use it as an actual dish or wash cloth. It's got to be mounted somehow or incorporated into something where it won't get abused. It's just about the right size to be a cover for my studio journal but I haven't quite figured out how to pull that off.
What I have done is get out some old intuitive piecing. The Intuition Quilt project and the other intuitive piecing I was doing most recently seem to be stalled at the moment. In an effort to get going again I dug around in my stuff and found two "blocks" I'd created months ago. One in particular spoke to me. The first thing I did was to add white strips all the way around both blocks to give them some breathing room. 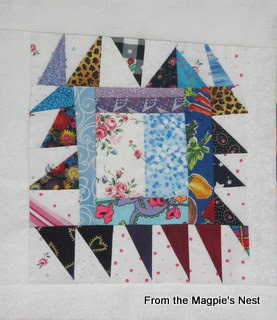 Then I found bits of piano key piecing. I added to that and started more strips until I had enough to do this: 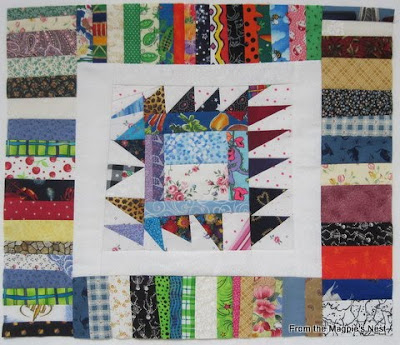 The second block is still just a sawtooth bit surrounded by white. I'll probably straighten it up today and maybe add just enough to it to make it closer to 12" square in case Janet chooses it for our Intuitive Swap. I've given her the choice between this one or the smaller one. I knew they were smaller than 12" with only the white strips but I didn't realize how much the piano keys would add until I went to straighten up the edges. I was not measuring anything and only using scissors to trim off excess seam allowances and such. It's about 17 x 15" now. Not sure what I'll do with the block she doesn't choose. Anyone else want to swap intuitive blocks? ;- )