I haven't been online much this week. But I have been monitoring the progress over at the Iraqi Bundles of Love blog.

IBOL Guy figures he's received 1,921 bundles so far. He thought he'd be doing good to get 50! Now he's getting whole pallets of boxes delivered directly to a warehouse. Amazing. The avalanche has only just begun too. What a fantastic grassroots project this has been. Just goes to show what one person can accomplish with a little help from his/her friends. :- )

Speaking of friends, this week I remembered that I still had a pile of blocks from one of the first quilt block swaps I ever participated in. There were about half a dozen of us who took up the challenge to use a print by Marcus Brothers in all of our blocks. We each made enough of one block pattern to swap with everyone else in the group and keep one for ourselves. For example, I made 6 identical blocks, kept one for myself and traded the other five for blocks the other ladies had made. We were all brand new quilters so of course none of the blocks came out the same size. That was the first stumbling block to getting them set together. I solved that problem by framing each block with strips and then cutting them down to the same size. Before I could get them set together into a top we moved across country. I've pulled the blocks out a few times since then but never could get them sewn into a top for one reason or another. Finally, after some 20 years, I guess they had matured enough for me to make them behave. (Or maybe it was me that matured?!) Seriously, I think this was probably the oldest UFO I had in my closet. It's now a twin size top that will be quilted and then delivered to a Foster Child somewhere in the region. 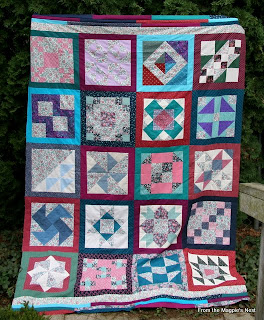 By themselves the blocks gave me the width I wanted for a twin size quilt but I didn't have quite enough length. Fortunately I still had a good bit of the challenge fabric leftover and some strips from framing the blocks. The challenge fabric is the light print between the blocks and the strippy border. If I were to do it over again I would make that a narrower band in the border but I'm not doing it over! This one is outta here - and on its' way to do someone some good I hope.

There were four blocks that didn't make it into the final version of the quilt top. I didn't think to photograph them for you - just as I didn't take the time to take pictures during the process of creating the quilt top. Rest assured they will end up in another quilt top, probably one made exclusively of orphan blocks. ;- )
Posted by Magpie Sue at 1:41 PM