This is what it looks like in our little piece of the world: 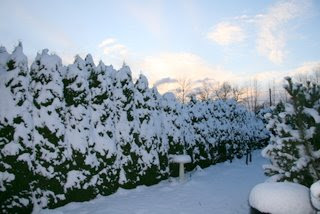 I realize an awful lot of North America looks like this right now but this is unusual for us! 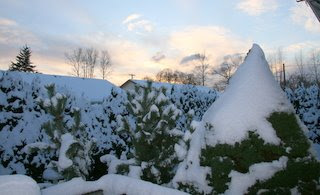 I had to scrape some 6" of snow off the top of my car yesterday afternoon before I could go out for more food. DS had to chip ice off the windows underneath the snow too. I feel very fortunate to still have power when so many are having to do without (and however are they managing?!). Our home is all electric so if the lines go down for any reason we would be up the proverbial creek. I don't even like to think about it. {shudder}

Happily, I have been keeping warm under this new-to-me quilt: 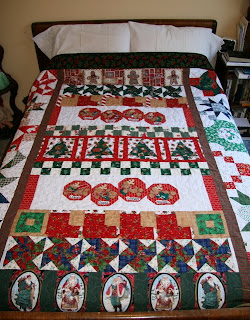 Because I have been keeping a studio journal of sorts for several years I was able to go back into old journals to discover that the original row-by-row round robin project that was the seed of this quilt began in January 2001. That's the part in the center of the bed/quilt. I started the project by making the two rows of reindeer (the snowball blocks). There were six other women who contributed to the top by making one or more rows. I set the rows together to create that center panel and then decided I wanted something more than a wall hanging. That's when I started making the sampler blocks that became the two side borders. 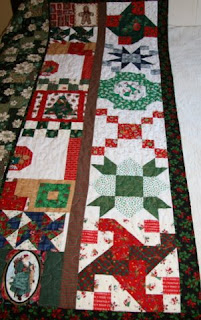 (left side border)
We moved in 2002 and consequently the quilt got put in a box and neglected for a few years. I unearthed it again in 2007 and began to assemble the top. Now it's a done deal. Woohoo!
I honestly thought the Christmas quilt project had been a UFO much longer than that. Maybe because I've intended to make a Christmas quilt for our bed pretty much ever since I started making quilts. Just to keep things in perspective, the next quilt that gets finished will be this one: 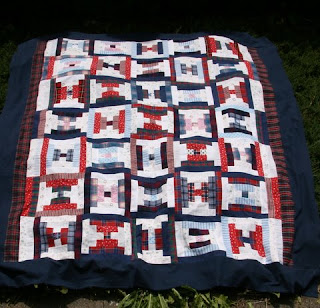 ...which has been a UFO since about 1995. I'm currently tying it and auditioning binding fabrics. Last night I was tempted to add it to the bed and sleep under it unfinished!
Posted by Magpie Sue at 10:51 AM