I think I was a teenager before the concept of setting goals was officially presented to me. And it did not go down well, let me tell you. Every time I was given an assignment that involved setting goals I would put it off, try to get out of it, moan and groan and complain until finally I was forced by the deadline to sit down and apply myself to the task. I never followed through on the stated goals if I could help it either.

Now that I'm in my fifth decade I have matured sufficiently to find goal setting not only easier to do but also desirable (at least in some cases!). Who'd a thunk it?! It only took some 40 years.

I bring this up because I've been thinking about how I'm going to cope without the Take It Further challenges next year. There doesn't seem to be enough interest amongst this year's participants to keep it going another year and Sharon is going in another direction with the challenge she's sponsoring in 2009. So I will have to challenge myself. I want to do a small monthly project, and I want it to be as much a mental challenge as an artistic one. (Does that make sense?)

I figure I need to come up with 12 challenges before January 1 otherwise I'll spend half of January trying to figure out what my challenge is! Also, part of the fun of TIF was waiting with bated breath for the first day of the month to find out what the challenge would be. So I'm planning to write out the challenges in advance, put the slips of paper in a tin or a box and draw one out on the first day of each month.

This is a new experience for me, planning this far in advance. By nature I am a leave-it-to-the-last-minute kind of gal. ;- )

It's not really eye candy, but I can't leave you without pictrues of some sort. I've done a couple more rows on my band sampler: 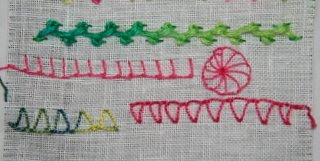 You'll notice I didn't bother with guidelines. I'm determined that this is to be a working sampler, not a showpiece. As a recovering perfectionist it's actually more difficult to let myself stitch freestyle than to mark nice even lines and have my work turn out more polished.

I have also sewn up these Bow Tie blocks: 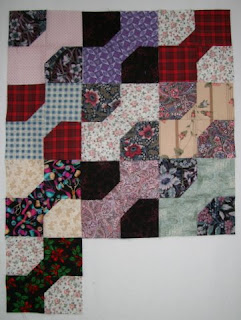 They finish at 6" but they sure look bigger than that to me! Right now they're orphans; someday they'll end up in a preemie quilt or something. Oh, and my Christmas quilt has come back from the quilter. All I have to do now is trim it and bind it. Time for a seasonal movie!
Posted by Magpie Sue at 6:49 PM