More Snow! and Another Christmas Quilt

Yup, we've had even more snow since my last post. And the first batch didn't even have a chance to melt away. Puts me in mind of my childhood in Michigan. Except we had snow tires on our cars back then. We've never needed them here ~ until now! I'm afraid I may not have stocked up on enough foodstuffs the last time I went out ;- ) 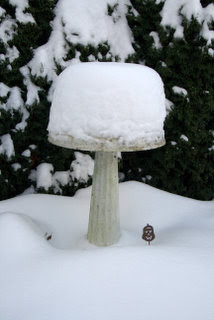 My poor jack o'lantern is up to his chinny-chin-chin in snow!
I have made some progress tying my flannel Courthouse Steps quilt (see previous post) but it's not ready to bind yet. Which may be a good thing since I can't for the life of me find a binding fabric I like with the quilt top. You'd think anything would work with that wide blue border. So far that hasn't been the case.

I've also made myself a new pillowcase, and made another for a gift. I don't want to show them yet because of the whole keeping-surprises-for-Christmas thing. I've also been thinking more about possible challenges for myself for next year. What a convoluted process that is turning out to be! A challenge in and of itself. As of this morning I have committed to participating in this workshop (sort of a workshop) in the hopes that it will help me establish a solid foundation for this year and the future. (There may still be room in the group if you think you would benefit from coaching in this area too.)

And now for another of the heirloom quilts in my collection... This is a Single Irish Chain made by my great-great grandmother, Abigail Stillwell Smith (bet she never used a three letter monogram on anything!). 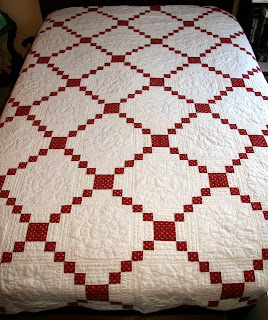 I currently have it on the bed under my Christmas Round Robin quilt. Having inherited this quilt earlier this year I feel like I'm sleeping under a Christmas gift every night. It would certainly be appropriate as a Christmas quilt since it's all red and white. Because of it's age - and good condition, which I want to maintain - I don't dare leave it on top of the bed. That room gets full afternoon sun (well, when the sun shines) and my dog spends part of his day on the bed. Talk about a disaster waiting to happen! 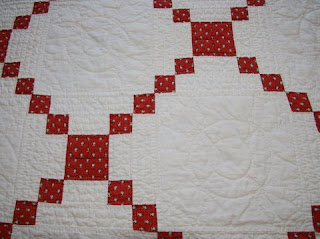 It would appear Abigail ran out of her primary print and had to find something else to fill in with to get enough blocks for her quilt.There are four blocks in the quilt top that are not identical to the others. Two like this one: 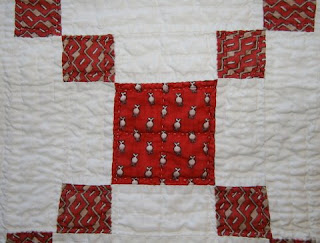 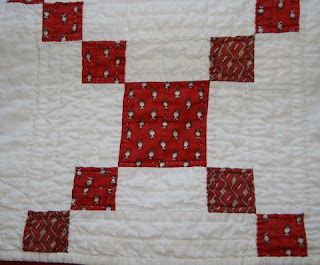 Hopefully you can click on the pictures to make them bigger.
Overall the quilt measures about 67" x 84." There are no borders, and it is bound with the same muslin she used for the alternate blocks and the back. I didn't measure the blocks themselves; there are 8 across and 10 down. I have no idea whether it was hand or machine pieced, but it is hand quilted. I also don't know exactly when the quilt was made. Since Abigail was born in 1835 and died in 1911 I think it's safe to say it was made between the Civil War and the turn of the last century. I feel a real sense of responsibility to have ownership of this heirloom. I may have to begin grooming one of my children to inherit it from me one day...!
Posted by Magpie Sue at 10:13 AM