We've had more snow. This is a picture I took of our birdbath yesterday. Now picture it with a cap that's twice as tall as what you see in the photo. Mr. Jack O'Lantern has completely disappeared, and not because he was yanked out of the ground. 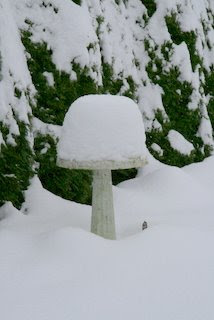 We even have icicles hanging from the gutters: 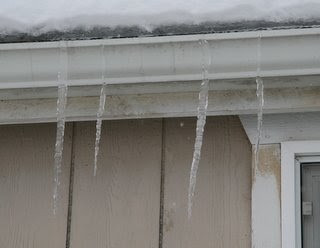 This bush has had a cap of snow for over a week. Now it's almost completely wrapped in a coat of white. 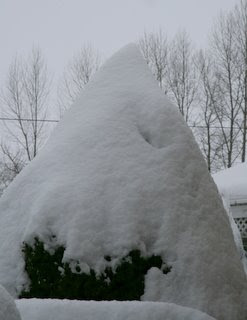 We have been fortunate so far in that we have not had freezing rain. I will be surprised if we don't end up with flood warnings when all this snow begins to melt though.
I found a piece of blue plaid homespun in my stack of Patriotic prints that should be ~just~ big enough to make binding for my flannel Courthouse Steps quilt. I also have my December Take It Further postcard laid out, ready for hand stitching. Too bad I'm so intimidated by both projects that I'm reluctant to begin either! Maybe I need to get my band sampler out and warm up by stitching a few snowflakes on it ;- )
Posted by Magpie Sue at 10:33 AM