I finished up my little quilt for the Alzheimer's Art Quilt Initiative yesterday. Now I'm just waiting for its' registration number before I ship it off - woohoo! 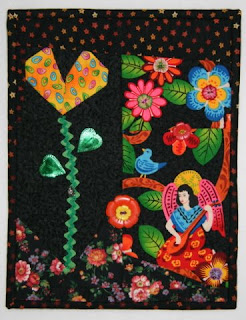 Once I had that done I pulled out a UFO from a decade or more ago: 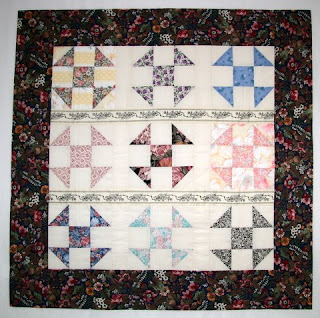 My intention is to turn it into a lap quilt for my mother-in-law. I think it became a UFO because I didn't know what to do with it back in the day. The wide border makes it look done but it didn't seem big enough to be useful (this was before I knew about quilts for premature babies) and it wasn't anything I wanted to hang on a wall at the time. But when I showed it to my MIL back then she really liked it. I remembered it while I was hand quilting the Priority Hope quiltlet. So I got it out, trimmed the border down a bit, and considered my options. I decided to add one more giant border, using some more Shoo Fly blocks. I've cut patches for nine blocks and plan to sew them up today. We'll see what happens after that :- ) 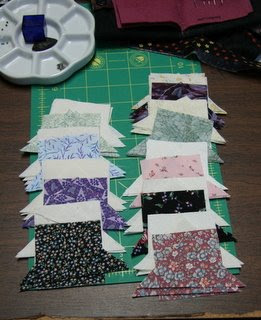 Now let's see if I can move the text around, leaving the pictures where they are, so you can click on them to make them bigger...