So, now that I feel like I have a little breathing room (having finished that swap quilt yesterday) let me show you a few things I've been blessed with recently. 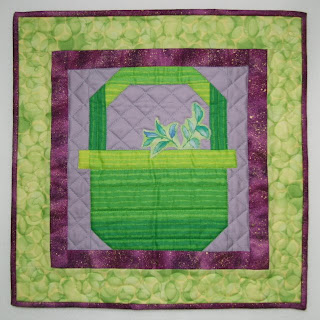 Carol of Giraffe Dreams made this happy little basket quilt last year. She put it in her guild's silent auction this year but it didn't get any bids {gasp!}. I admired it when she showed it on her blog and expressed an interest in acquiring it. The quilt was returned to her after the show so she let me know it was still available. We made a deal whereby I would make a quilt or a cash donation to Wrap Them in Love and she would send me the quilt. Yippee! Now all I have to do is hold up my end of the bargain ;- )

The other goodie I received recently came from my sister. Some time ago she was in a thrift store, looking for a basket to hold miscellaneous small items in her bathroom. She didn't find any baskets she liked but was delighted to find clothes that fit. Then she learned that everything in the store was 50% off that day! By that time she was on auto-pilot, cruising the store for anything else she didn't know she needed but couldn't resist. (You know how that happens, right?) She ended up bringing home a dozen silk ties along with her other purchases. First one caught her eye, and then another one that had the same colors in it, and before she knew it her arms were full of ties! She toyed with the idea of doing something with them herself but she doesn't sew much. So I got this box in the mail a few weeks ago: 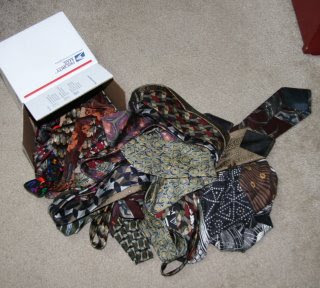 Woohoo! Playtime! Except that I haven't washed them yet. I have removed the labels and interfacings, but then I had a swap quilt to make... 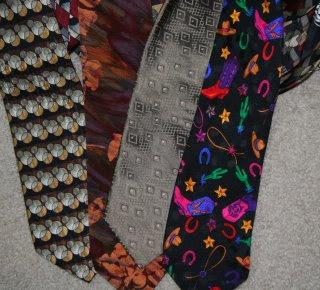 These are a few of my more favorite ties of the batch. Of course the colors in the photograph aren't exactly true. They are much prettier in person. A couple of them have that iridescent thing going on where you can see more than one color, depending on how the light hits the fabric. I especially like the tie with the cowboy motifs. Apparently that was the one that started the whole tie-buying spree. I can hardly wait to see what it ends up in!
Posted by Magpie Sue at 10:30 AM