Forgive me if I sound a bit terse this post. I did, in fact, go out shopping yesterday (and took my new tote with me and received at least one compliment, thank you very much!). I forgot it was a holiday for a lot of people. The stores were crowded. More people means more exposures for me. It's going to be a few more hours before the full effect wears off.

You may recall that the challenge for this month's Take It Further challenge was to create a resolved design based on someone you admire. I chose to depict (or try to depict as the case may be) the quality that I admire rather than any specific person. I'm still not sure what the best word is for that quality but it has to do with having a very strong sense of self. Being very sure of who you are and what you want out of life. The best symbol I could think of for that was a queen. A good and righteous queen, not someone wicked or evil or power hungry.
I had originally pulled a Burmese silk that I thought I would use for my base but I couldn't stand using just one fabric, and a solid color at that. Cottons didn't seem appropriate as I wanted to convey the feeling of royalty so I went into my stash of silk ties. I wanted to use purple because it has always been associated with royalty. I found the coolest hand-dyed silk! To get the colors I wanted I had to piece sections of it to cover my little 4" x 6" batting. At first I thought I would use it this way, with the seamlines creating an inverted V in the center of the quilt: 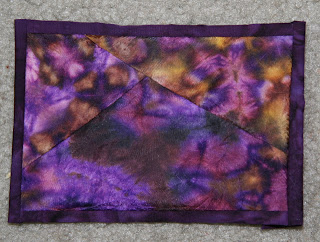 But then I turned it around to see how my button and charms would look with the V at the bottom of the piece. I liked that better.
It occurred to me that cats embody the quality I was trying to depict so I found a cat button to add to my piece. I cut off the shank and filed the back down smooth with an emery board, then secured the flat button with a couple of strategic stitches.
Now what? The center had stuff going on in it but the perimeter of the piece was blank. What to do, what to do? Eventually I thought of spiders and how unflappable they seem to be when their webs get damaged. They just repair or rebuild (and we never hear them complain about it!). That's an element of the quality I admire in others so I put a spiderweb in one corner with metallic threads. Then then other corner cried out for some embellishments too. I have a deck of playing cards that have illustrations of flowers and the meanings the Victorians assigned to them. Going through that I found a card for Canterbury Bells which apparently stand for Constancy, another element of the quality I admire. My flowers in the upper right corner are not exactly Canterbury Bells but they come close ;- ) Then, yesterday, I went to my LBS and bought a few more beads in the right shade of green to finish off the bottom edge. Technically this piece still has to be mounted or finished somehow but the design is resolved: 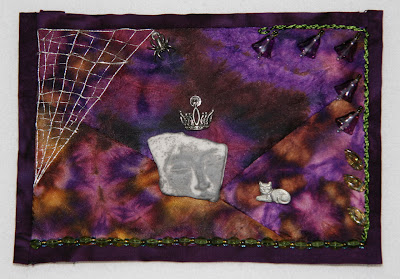 I also pieced three prototypes for my January BJP journal quilt yesterday (before I went out!). I thought maybe the third try was going to be the one I would use for my quilt but, looking at it this morning, I'm thinking I may have another go with a different set of prints. The ones I chose yesterday are too busy to allow any beading to really show up. Whether that happens today or not remains to be seen...
Posted by Magpie Sue at 9:27 AM